I met filmmaker Jared Flesher at last years SNOB (Somewhat North of Boston) Film festival, where he was showing his first documentary The Farmer and the Horse. That documentary, which is a great example of storytelling, follows three young farmers who are just starting out and want to use horses rather than tractors.

Now he's working on a new documentary, Sourlands, about The Sourland Mountains, which he describes as "the last green spot on the map between New York City and Philadelphia."

Jared answered some questions about the project, which he's already started work on, and will be shooting with the Panasonic GH2:

1) Where did you get the idea for this project?
For me, the Sourlands are home -- I grew up in New Jersey and decided to come back after I graduated college and traveled around for a bit. As a journalist and filmmaker, I get excited about finding local stories and telling them in ways that demonstrate how local issues have national significance. Because at the end of the day, all journalism is local. I guess you could even say all life is lived locally.

2) What is the shooting schedule?
I think the reality of independent documentary filmmaking is that you have to work fast if you hope to be profitable. And that's because work time is the most expensive part of making a film. My goal is to shoot, edit, and release Sourlands in 12 to 18 months, and then devote another 6 months to marketing it. That's the same schedule I ran my first film on, The Farmer and the Horse. I'd like to finish a new feature documentary every 18 months. Or every two years if I'm slow.

3) How long do you think it will take to edit the film?
I start preliminary editing right away, while I'm still shooting, so usually I can finish up a rough cut just a few weeks after I complete my final shoot. When I'm interviewing someone on camera and they say something intriguing, it often jumps right out as something I will use in the film. So I go home that night and drop it into my editing timeline. I'm not sure if that's how many editors work, but that's always been my process.

4) What are the biggest lessons from your first project that you're applying to the production of this one?
I think people get interested in a documentary film because of the subject matter, but they love it or don't love it based on whether they connect with the characters. The editor Walter Murch has this hierarchy of editing in which he says you should always make storytelling and editing decisions based on these elements, in this order: 1. Emotion. 2. Story. 3. Rhythm. Technical considerations are way down low on the list. When I saw what people reacted too and didn't react to in The Farmer and the Horse, I realized that Murch was pretty much dead on.


Here's more details about the project:

The Sourlands are hardly what most people would deem mountains—they rise to a height of just 568 feet—but their rough terrain has helped insulate them from New Jersey’s famously sprawling suburbs. They are home to Central Jersey’s largest contiguous forest, threatened wildlife species, and a history layered with legend.
In the final film, expect to see everything from first-year farmers to land conservationists to tax-battling politicians to bird-chasing ornithologists. 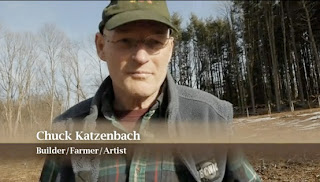 Jared's looking to fund the movie through Kickstarter, and is already well on the way to the $5,000 goal. You can check out the trailer he's put together here: Sourlands: A Story of Land, Energy and a Life More Local

See Also:
NotesOnVideo: Interview: Filmmaker Jared Flesher
The Farmer and the Horse
Posted by Michael Murie at 11:00 AM