Robin Schmidt (El Skid) isn't impressed by the AVCHD format used by the NEX-FS100, and is holding out for a Canon 5D successor: SONY NEX FS 100 c/o DEN LENNIE – INTERESTING 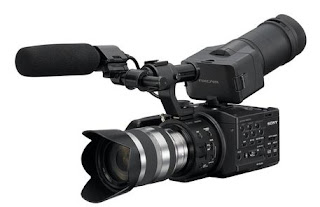 As promised, Sony has rolled out the new large-sensor camera, the NEX-FS100. (That's a surprise, I thought it was going to be the NXCAM FS100...interesting that they have thrown in the NEX designation due to the E-mount)


The NEX-FS100 is a new E-mount professional camcorder equipped with a Super 35mm CMOS sensor specifically designed for shooting motion pictures ideal for commercials and music videos, as well as action scenes in budget drama for example.The large-format sensor's high sensitivity enables it to produce footage with shallow depth of field similar to that of a film camera.

[UPDATE 1]
Den Lennie of the F-Stop Academy got to spend 24 hours with the camera and shot a music video: Cozi: 'Vertigo' Music Video.

He's put together a video blog about the camera which is well worth watching:


Videomaker got to spend some time with the camera
Videomaker: Hands-on With Sony’s NXCAM Super 35mm Camcorder