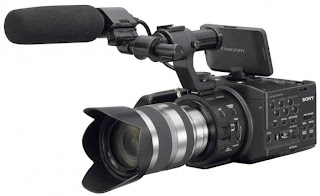 Only a few days old, and the NEX-FS100 seems to have prompted as much heated reaction as any camera announcement I can remember. Much of it might be written off as a difference of opinion between the different factions of the video community; ENG Video Pros don't seem to like the compromises (lack of ND, small controls, no HD-SDI) while DSLR shooters aren't so sure they need all the buttons, and don't like the price. And everyone agrees that what they really want is the PMW-F3 for $2,500.

Could Sony finally have made a camera that no one likes?
Let's not be too hasty.

It's second hand reporting, but Ira Block reports that his friend Mark Forman has had a chance to play with the NEX-FS100 and said of it:


He told me the native ISO for the camera is 800 and the night footage that I saw which he shot at 2400 ISO, had very little noise.
[...]
The Sony is a true video camera with a monitor and good sound capabilities. It also accepts professional cables. Mark noted the NEX-FS100U has less color aliasing and moiré than the Canons in the video mode. He prefers the Sony’s codec (video compression signal) because it simplifies the video editing workflow as opposed to the codec in the DSLRs which adds an extra step.

Tony Reale at NextWaveDV recounts the history of HDSLRs, the arrival of the Panasonic AG-AF100, and the NEX-FS100, and also resights the slights against the latter (lack of ND filters, HD/SDI and build quality) then posits:


Perfection is obviously too lofty of an expectation, but getting a high value to the amount you’ve invested isn’t. The question becomes, are these cameras worth the premium price over the DSLR you now use?

Surveying the landscape, he concludes that people now have more choices, but leaves unanswered whether they are choices that the shooters want. Which large sensor video camera should you choose? AF100 vs. FS100 vs. HDSLR

Blood in the water
Meanwhile, EOS HD takes on the value proposition. Leaving aside the question of whether the NEX-FS100 is hobbled because of the PMW-F3, he wonders what people get for the extra $ an FS100 will set them back compared to a DSLR?

He dismisses image quality, on the theory that most YouTube viewers won't see the diference, and also ignores the full HDMI out, proper audio jacks and monitoring, and other features, concluding that all you're getting are....buttons!

And I guess he's right. If all you think the NEX-FS100 does is add a few buttons, then yes, it's not worth the price. EOS HD: The Sony FS100 - Why professionals are all mad


Meanwhile, Philip Johnston at HD Warrior has also laid into the camera, mostly on the strength of Nigel Cooper's review. Philip, it should be clear, comes from the professional videographer end of the spectrum, and I can understand why he would prefer the Panasonic AG-AF100 or the PMW-F3 over the NEX-FS100. Still, he's pretty rough on it:

He slightly amended this comment when he found out that Den Lennie had taken part, but then suggested that by the time he became involved Sony would have already designed the camera, so that any changes Den might have suggested would be marginal.

When I pointed out that Alister Chapman also took part in the focus group, and that the focus group seemed to want something closer to a DSLR than a typical video camera - and Den even said in a webchat that he was happy with what they had done - Philip's response was:


Thats my problem with this whole debate we are compromising to suit the DSLR which is nonsense.

Good luck to any video camera company that hopes to make everyone happy.

Posted by Michael Murie at 2:30 PM

Thanks for a very balanced and objective round up Michael.

The trouble with many bloggers is that there is a 'not so' hidden agenda (to increase traffic) and that is to court controversy because for te most part they are looking to raise their profile by poking sticks around. And that's cool.

But the professional user is thankfully wise to this and so to see a round up of the arguments for and against is refreshing.

When I first ever picked up a professional camera TV crews had 3 on the team, a cameraman, lighting and sound guy. Then around 1987 the betacam camcorder was created and over the years we've witnessed many technological shifts, 4:3-16:9, analogue to digital and SD to HD. Latterly 2D to 3D and with the further advancement of stills technology we've recently seen DSLS shoot incredible video. What this means is that there is something for everyone. This in my view can only be a good thing.

I have no need for a RED camera or an F35 because i don't shoot those kinds of jobs. But they are great tools for the right customers I do however own 3 dslr , am heavily invested in glass and accessories and I have an EX-1.

I have the tools to tell a story- the NEX FS100 would be a welcome addition to that tool box, I'd more than likely sell my EX-1 and replace it with this new camera because for promos and jobs that I might have used a dslr, I'd prefer a camera with camcorder controls. .

Anyway just my view and thanks again for correlating all the info.