They found both cameras to be rather large and bulky, and wonder if users will be willing - in this age of ever shrinking cameras - to put up with it. 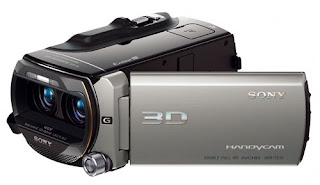 Even though it was $500 cheaper than the JVC, the Sony HDR-TD10 impressed Camcorderinfo less than the JVC:


...we were not impressed with the [HDR-TD10's] glasses-free LCD capability. The images often had plenty of ghosting and blur when we watched them on the tiny screen and, at times, the LCD’s 3D function didn’t appear to work at all.

[...]we expect the HDR-TD10 to do quite well in our 3D testing. The Panasonic HDC-SDT750 did a decent job producing a 3D effect in our labs, but we’re hoping of even better performance from the Sony due to its dual lens and sensor setup. If the Sony HDR-TD10 does blow us away with its 3D performance, we may revise our critique of the camcorder. But, for now, we remain disappointed with the TD10 based on design, handling, and the poor quality of the glasses-free 3D LCD. 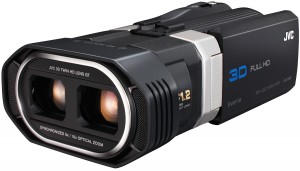 What they seemed to like about the JVC were the manual controls:


What impressed us about the GS-TD1 was the camcorder’s extensive set of manual controls and features that were functional in both 2D and 3D record mode. This includes regular manual controls like shutter speed adjustment, as well as other features like 3D time-lapse recording and a 3D still image mode. These are things that set the TD1 apart from the other 3D camcorders currently available.

Note too that the 3D LCD screen on the JVC seemed to perform about as well as that on the Sony:


Honestly, the LCD looked very bad in our time with the camcorder, but we saw the same poor performance from Sony’s glasses-free 3D LCD on the HDR-TD10.

But the real question is "how good are the images?" and we'll have to wait for a review of that.