Vladimir Verendeev has posted a short video comparing footage taken with the Sony NEX-VG10 and the Sony FX-1 (the latter is a six year-old 3-chip HDV camcorder.) I'm particularly interested in this comparison because I have an FX-1.

It's really useful to see this kind of thing, though I wish he'd included exposure information. The FX-1 definitely looks to be darker and less saturated compared to the NEX-VG10, but while the images from the NEX-VG10 look brighter, they also look like they might be a little too over-saturated (it's hard to tell without knowing what the actual colors are.)

Also, the angles aren't exactly the same, so it's difficult to tell if that's what is creating some of the differences 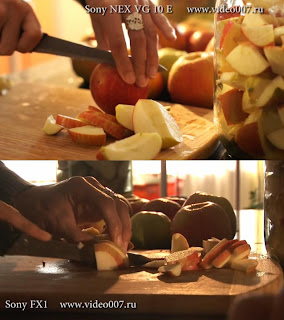 The NEX-VG10 footage at the beginning looks particularly appealing with the neon red pickle jar, though the apple cutting looks somehow artificial.

I downloaded the .MPE file, and looked at the still images at 1080, and that's when you really notice the differences. Well, firstly, the FX-1 is interlaced, while the NEX-VG10 is not, so you nearly always have feathering in a still frame from the FX-1 footage (something you don't see when playing the Vimeo footage; the Vimeo compression has the effect of deinterlacing the footage.) It also has noticeably less detail (hardly surprising given that it's recording at 1440 x 1080, rather than 1920 x 1080.)

The last two shots are the most interesting because though they are taken from different angles, both have part of the image blown-out by light pouring in through a window. The NEX-VG10 does a very good job of handling what must be a back-lit subject on the very last shot (again, I'd like to know what settings/modes were used.)