As a one-person, no-budget production house, I often end up in situations where there's poor light; and lots of noise in the video footage. There are, of course, solutions to this problem. I have a light kit, but often don't have the time (or energy) to set them up for a quick shot. And some locations don't really allow you to set up lights. The newer cameras are performing much better in low light than the cameras from just a few years ago; the Sony HDR-XR500V

bought last year is a huge jump up from the Sony HDR-HC1 bought four years earlier. Still, noise is a problem, and when a friend mentioned the Neat Video Plug-In as a possible solution, I had to check it out.

Neat offers a free download evaluation version that you can try out, though it only works with Standard Definition video. A few weeks back I did create an SD resolution test clip to try it out. The test went  well, and I was pretty impressed, though I was still on the fence about spending the $99 for the "Pro" version which will do HD footage. 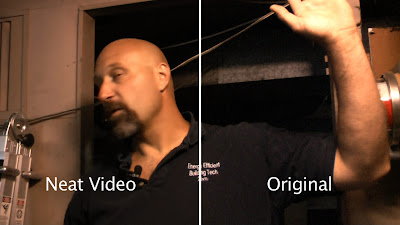 But this week I've been editing some footage shot in a basement with limited light using a Panasonic AG-HMC70U. While I was really impressed with the footage considering the conditions (and the fact this is based on a consumer camera) there was a lot of noise in the black shirt of the subject, and I found it distracting!

After a bit more dithering (no pun intended), and reading a review by Steve Douglas on the LAFCPUG site, I decided to take the plunge. So far I'm impressed, though with one important caveat (see below.)

It took a couple of hours to get the link from the site to download the plug-in (the site warns it can take up to 24 hours) and installation was hassle free, though you do have to enter the user name and registration code a second time when you first launch the plug-in filter.

Once you open the filter, you have to choose a region of the image that's fairly consistent in color for it to analyze (I used part of the wall on the left-hand side of the shot.) The plug-in complained that the region selected wasn't really large enough, but after dismissing the warning, it worked happily enough (Steve's review shows the interface of the filter.)

I'm thinking that in future situations, where I know that there might be noise, I should shoot a test clip at the beginning that I can use for the filter to analyze....I'm going to have to experiment with that to see if it's worth while.

From the still frame above, you can see a noticeable improvement in the noise. Note that the video was shot in 1080, but after processing was downsampled to 720P. I did this because this is the format I'm currently using for most of the final material.

So that's the good news.

The somewhat not so good news, is what happened when I created a test clip and uploaded it to YouTube (see below.) While the final file in 720p on my computer shows a very noticeable difference, once YouTube gets hold of it, the difference is much less noticeable. Take a look at the sample below. You'll see that much of the noise has disappeared from the "before" clip already.

So should you buy it? If you're in the situation of shooting in low light then I think you definitely should. It does make a noticeable difference, but you do also need to be aware of your final distribution format. The more compression you're using, the less you have to worry about noise.


Of course, if the Neat Video plug-in doesn''t do the trick, maybe you need to get the professionals involved: