On location all the footage is offloaded to hard-drives and then it gets overnighted via a courier to MLB headquarters where a team of editors and loggers ingest the footage and begin to start crafting rough cuts of each game. To create the final World Series film, they use a combination of footage from the broadcasted games, the footage we shoot, and the footage from MLB Network cinematographers as well the interviews that are captured throughout the series


This week’s show brings legendary cinematographer and firebrand Haskell Wexler into the studio to discuss the ongoing face of truth in the media. Detailing some of the history of his sparkling and muck-raking career, from the Chicago 1968 Democratic Convention riots to the current Occupy movement, Mr. Wexler illuminates the necessity to bring truth to the public through film and journalism.

Avid Studio for iPad. This sh*t just got real, yo! | Taz Goldstein
Noting that it's not a pro app and lacks any sort of EDL export, Taz is still impressed, with some reservations:


All is not perfect, however. I experienced a LOT of crashing on my iPad 1 (it performs much better on an iPad 2). So much crashing, in fact, that at some points I couldn’t even get the app to launch. Clearly, that needs to be addressed quickly or Avid stands to upset many potential customers. Also, I’d like to see the addition of more transitions (which is an odd request from me since I hate most transitions).


Panasonic's forecast loss of 780 billion yen ($10.2 billion) for the year to March dwarfed expectations, and is almost all due to restructuring charges and writedowns for its Sanyo Electric unit.


I then took all the footage through Apple Color to see how it responded to grading. My adjustments consisted mainly of tweaking the luma curve for contrast and bringing the offset exposures to a normal brightness, tweaking saturation, and slight color tweaks, mostly consisting of a slight increase of blue in the highlights and decrease of blue in the shadows. Certain picture profiles created some nasty clipping in the blue channel as a result of the background light, in these instances I used a secondary correction to tone down the saturation in that part of the image. I was surprised by how easy it it was to bring down the over-exposed footage.


The MC begins and I go back to my Zoom. The audio is terrible. Loud. Distorted. I have to act. So I switch the Zoom input from the XLR to the built-in mic. Now I’m recording the ambient audio from the audio speakers that are only about 8 feet in front of us. It actually doesn’t sound too bad. Although, being so close to the speakers makes it kind of hard to discern. In either case, it’s good enough for now. It’ll buy me some time to run and get my XLR to XLR cable. I’m hoping that’ll fix the distortion issue.


For the life of me I could not find out how to adjust the ISO unlike a conventional camcorder the C300 does not have a gain switch so in order for you to add gain to your picture you need to press the function button and by using the wee rubber joystick which is just above the words CANCEL you navigate to the ISO in the LCD then simply move the joystick up and down to select your ISO. You do have the option to assign the ISO to the select knob but that disables the IRIS which is a tad stupid. 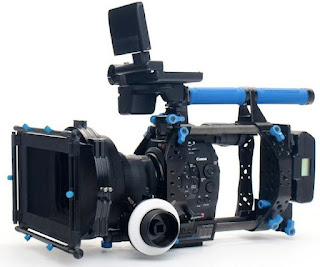 Redrock Micro ultracage | Facebook
Redrock posted this picture of the ultraCage blue for Canon EOS C300 on their Facebook page. The monitor on the top rails setup can be located just about anywhere front or back, left or right, on the camera.


iBooks Author 1.01 out with updated EULA | Megan Lavey-Heaton | TUAW
Apple "clarrifies" the End User Agreement for iBooks Author that Apple has rights over the format the book is in, not the content.