Showing my lenses thus far, I'm not really a "test film" type guy so no fantastic sets, models or spectacular After Effects sequences involved just my Big Fat head :)
Thanks to Frank Glencairn for his G-LOG PP's

Feeling Nervous on Day One? 5 Steps to Curb Your Anxiety | Evan Luzi
| The Black and Blue
Some tips for overcoming anxiety during a shoot:


5. Stay Busy Until You Start Rolling
A lot of times, especially on day one, you’ll have a few hours of setup time before the first shot starts rolling while the grips unpack the trucks and start rigging, the juicers test lights and pull lamps the gaffer prefers, and, in general, everyone develops their sea legs.
This is the time in which you are most vulnerable to your anxieties because your mind can start wandering.

Five Tips for Making an Interview Subject More Comfortable | Ron Dawson
| Dare Dreamer
How to conduct interviews with the anxious people on the other side of the camera:


Warm up. You wouldn’t jump into a major sporting contest before stretching and warming up. The same goes for an interview. Don’t start the interview cold. Spend a few minutes with them in front of the camera, and just shoot the breeze. Talk about school, family, kids, movies, what have you. Get their juices flowing and get them used to being in front of the camera.

Auro 3D | Barco
Product info page on a 3D audio system that was used for the movie 'Red Tails':


'Red Tails' - George Lucas’s film on the Tuskegee Airmen, a group of African-American combat pilots during World War II – is the first movie ever mixed in Auro-3D, a revolutionary sound system that adds an extra height dimension to cinema sound. [...]

Webinar: Get a Film Look Without Shooting Film | Studio Daily | Vimeo
Recording of a webinar on creating a film-look, though it sounds complicated and expensive...:


Jerome Thelia, co-founder of Merge Group (NY), demonstrates the technique used in the making of Shawn Christensen's “Curfew” (January 2012), which was shot in RED MX, digitally graded in SCRATCH, and recorded out to film stock to achieve the best combination of grain structure and colorimetry. His presentation includes the use of log scans, LUTs, anamorphic resizing, histogram, and split screens for color matching/comparison.

Canon C300 News
CANON EOS C300 Review | Emmanuel Pampuri | Vimeo
It's in French! I don't understand a word they are saying! But it's a long discussion on the C300, with sample images.


DP Alex Buono Talks Canon C300 | Clint Milby | Vimeo
Alex is DP for the Saturday Night Live film unit, and he's spent one day with the C300 and was "really blown away." Here's a short interview with Alex:


Hands on with the new Canon C300 | Paul Gwilliams | Blog
Detailed article about doing a shoot with the C300:


Hand held the camera in its ‘out of the box’ set-up is a joy to use, Holding the camera with the grip which is solid & ergonomic & a nice little lip at the front – it feels natural & comfortable, both the viewfinder & eyepiece are easy to access & you have most of the buttons you might need – such as to control the 3 NDs, white balance etc on the side. 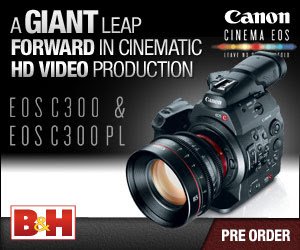