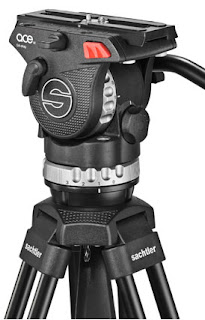 Sachtler has unveiled the Ace, a lightweight tripod for cameras up to 8.8 lbs, that offers Sachtler quality at a lower price point.

Philip Bloom got to play with one before it was released. He says that it will be available for about £480 (~$765)


The head is lovely and smooth, although doesn’t quite have as many friction points as I would like on the pan and tilt. From 0 to 3. But it’s fine in practice. Sachtler friction is in whole stops unlike others where you just turn the dial until you are happy. It also means at 0 the head has zero friction on it so it’s free floating. Good for controlled pseudo handheld work.


Daniel Freytag also got to play with one, and has posted a short review:


If you're in film business, work with a DSLR and have a rig with a camera and a few accessories, then this is YOUR tripod. The Payload is 0-4kg, so with a 800g DSLR (e.g. 7D) you have 3.2kg for monitor, accessories, cages and more. This is truly enough and the features of this new tripod are making it easy balance it and use it.