More details about the Sony F65

UPDATE 8:00 AM 9/7
I overlooked an important detail. The rotary shutter is a separate model:
And, you can control it through wi-fi using Android and iOS devices, making this camera possibly the most expensive iPhone accessory. 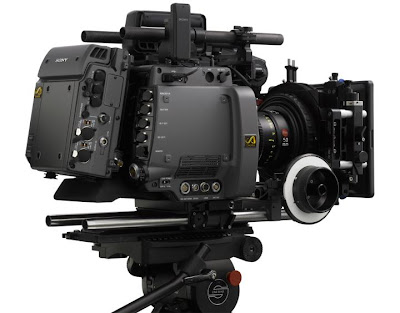 The F65 was pre-announced at NAB, and now Sony has come out with pricing and shipping information.

This camera uses an 8K CMOS sensor to produce a 4K resolution image (4096x2160) and is expected to start delivery in January, 2012. It has a rotary shutter to eliminate rolling shutter, and the CMOS chip has, according to Sony, a green photosite for each pixel (there's half your 8K pixels right there,) and then the other half are red and blue. That suggests that every pixel in the final image is built from two photosites on the sensor; one green and the other either blue or red. I wonder what the color aliasing for this sensor will look like...

Sony seems to like mixing things up on the sensors of their high-end cameras; the F35 used a somewhat unusual color array as well: Sony F35 : Another unusual sensor