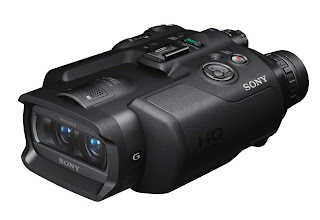 A couple of sites have already had a chance to spend some time with these binoculars;


Using the double electronic viewfinders was easy when looking through the binoculars, zooming in and recording video. However, using them to scroll the menu system and playback footage was difficult to get used to. The optional added 5-inch LCD on the top made a huge difference to the usability of these binoculars. [1]


And as others have noted, they look like they came out of Star Wars! 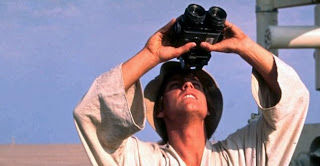 It's probably not surprising that Sony would think to add 3D capabilities to binoculars. The devices seem to be based on the same basic platform as the 3D camcorders from Sony (the HDR-TD10 [$1,499]). They seem to include most of the same functionality, including HDMI out and SD card/Memory Stick recording.


"Binoculars, being stereoscopic in nature, really lend themselves to 3D technology," [senior product manager, Phil Bouchillon] explained. Indeed, with separate sensors and lenses in each eye of the device, Sony would have been remiss to pass up on 3D video recording capabilities here. [2]

Given that they have the same focal length range as the HDR-TD10, I really wonder whether, if you're interested in dabbling in 3D, these binoculars might not be a better choice:
On the other hand, walking around filming, with these held to your head, may seem a bit odd...