Review of the Sony HXR-NX3D1 | Philip Johnston | HD Warrior
Philip does a rather unusual 2D review of a 3D camera. Odd that he doesn't post some of the 3D video (YouTube does support 3D video.) He does think it's a really good 2D camcorder, and even likes the way it feels when holding it. He also prefers it over the much cheaper consumer model - the HDR-TD10 - which is very similar, though it lacks XLR audio input.
He does note that there's limited manual controls - there's no gain control - and in 3D mode the options are even fewer; you can literally only set exposure, focus and zoom; spot metering, white balance, IRIS and Shutter Speed are all disabled.
[You might also want to check out the new digital binoculars that Sony announced today.]
B & H: HXR-NX3D1 NXCAM 3D Compact Camcorder [$3,99.00]
B & H: Sony HDR-TD10 Full HD 3D Camcorder [$1,498.00]

*UPDATED* Big Megapixel Camera Next Week | CanonRumors
Next week Sony is expected to make some interesting camera announcements, and now it seems that Canon and Nikon might do the same, though what they will actually announce is still unclear.
It does also appear that Canon will introduce something that will be of interest to the video community in the next few months, though it may not be announced next week...

Samsung W200 waterproof / rugged 1080p camcorder review | Darren Murph
| Engadget
Engadget does a pretty complete review of this $150 "ruggedized" 1080p camera that is also waterproof down to three meters. It gets surprisingly positive results underwater, though low-light performance in general isn't that great, and the jello-effect is noticeably in many places.
Also, a short drop of the camera seemed to compromise the water-proofing of the LCD.
Amazon: Samsung HMX-W200 Waterproof HD

OS X Lion: We are ‘roaring’ through the issues! | Red Giant Software
Red Giant provides an update on the status of their products when used in Lion. There are a few problems with Final Cut Pro;


We are happy to report that all of our products work perfectly between Lion and Adobe host applications. With FCP, there are a few issues that have come up, primarily with some of the products in our Magic Bullet Suite (read below). 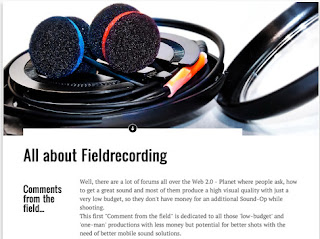 Open Media Magazine! | Daniel Freytag
An interesting new eBook type product for the iPad and iPhone that is dedicated to various types of media. It's free


Skip the Gym and Head to a User Group Meeting | Wendy Woodhall
| masteringFilm
How User Groups can help you:


...in our business it’s word of mouth and personal connections that get you hired. As the owner of a post audio studio for over 10 years, I spent a lot if time looking through resumes but there is simply is no substitute for meeting someone in person, getting to know them and meeting others who have worked with them. User groups are incredible places for this. We actually hired two engineers we met through our meetings over the past year.

iPad App Lets You Finger-Paint With Video | Charlie Sorrel | Wired
Composite is an iPad2 app that lets you collage together bits of real life as if you were painting them onto the screen. NOTE: Requires a camera, so iPad2 is required!
iTunes: Composite - James Alliban

Pixar's Cash Grab with 'Cars 2': How Much is Your Soul Worth? | Joe Bader
| FilmSlate
Interesting report about how Pixar made more money from merchandise for Cars:


“Cars” merchandise sales worldwide through 2010 were estimated by the LA Times at $10 billion, 51% more than the aggregate worldwide gross of all 11 Pixar movies prior to “Cars 2.”

Amazing Optical Illusion Shows That Our Eyes Are Horrible Light Meters
| Michael Zhang | PetaPixel
An optical illusion that is hard to believe when you see it as a graphic; but seeing it recreated in reality it's even more incredible!


The Mountain from TSO Photography on Vimeo.
Posted by Michael Murie at 9:00 AM