Adobe has rolled out Muse, their new WYSIWYG HTML web development tool for those of us who hate HTML. Think of it as Adobe's answer to Apple's iWeb tool.

At the moment it's a free download as it's in "public beta" until "early 2012." It's definitely beta; it crashed repeatedly when I tried to paste an OBJECT tag into the Insert HTML function!

Muse has a four-mode way of working; Plan, Design, Preview and Publish, and provides a number of widgets that make it easy to add functions like menus and accordions. You create the basic structure of your site in the Plan mode, then add actual content in Design. It's also a bit unusual because it's an AIR app, but the really unusual thing about Muse might be the pricing model. 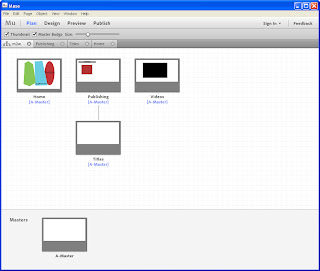 Adobe Muse Plan View
Rental Software
Muse will be available by subscription only. According to Adobe, "this will allow us to add new features to Muse regularly and customers will always have access to the most up-to-date functionality." It also means that Adobe will have a guaranteed revenue stream.

The idea of renting software - rather than buying a license outright - is not new in the software world, though it has been unusual in mass market software. Usually it's been restricted to small niche products that often require a large amount of help and technical support.

Which raises the question; could Adobe go to an all subscription model for other products? Will Adobe Creative Suite 6 only be available by "subscription?"

Adobe already introduced a software rental - or subscription - program for their Creative Suite products back in April; Premiere costs $59 to rent monthly, $39 per month yearly, or $799 to buy outright. At the time, there were some articles about whether it makes sense to rent or buy, but with Muse, there won't be a choice. Could this experiment with subscription-only pricing for Muse be indicative of the direction Adobe intends to take with their other products?


Will Adobe Creative Suite 6 only be available by "subscription?"

Apple's model
Interestingly, Apple has changed their pricing model as well. Leaving behind the argument over how good or bad Final Cut Pro X is, they have done away with the upgrade pricing model for their software. Existing owners of Final Cut Pro 7 didn't get a break on buying the new release. But then the price of the new release was lower, and you are buying an outright copy, not a subscription.


The Future
For commercial sites and those with big budgets who need to always have the latest and greatest, whether it's a subscription or a purchase model probably isn't a big deal. Particularly if the subscription works out to be roughly the same as what they'd spend on buying the updates as they are released.

But for those on limited budgets, subscriptions are a mixed blessing. The monthly subscription model allows you to get the software without spending the big money to buy the package outright, but it also means you're on the treadmill to keep paying. You can't stay with the previous release for a couple of years and save some money.

To be clear, I have absolutely no idea what Adobe will do. I hope that they don't move to subscription-only pricing, and would encourage everyone who thinks the same way to let Adobe know. But if you have been thinking of buying the Adobe Production Creative Suite or Premiere Pro you might seriously consider buying the Adobe Creative Suite 5.5 Production Premium at the 50% before October 31st!* Though not because of what might happen in the future, but because it's a good deal!


Note: I contacted Adobe to see if they had any comment about a change to subscriptions only pricing but have heard nothing from them.

* Note, if you buy the software through the above link, this site does get a referral fee

Adobe is one of the world's leading software makers and it's so good that they are now delving into the real property business because many landlords need quality software that Adobe creates. rental software