Sony’s NX70 Rocker Switch…”Taking the bull by the horns” | Philip Johnston
| HD Warrior
Philip did a review of the Sony HXR-NX70 [$2,799.00] weatherproof camera a while back that was very complimentary, though they noted that the rocker switch on it doesn't work as well as you'd hope.
He recommends using a Manfrotto 521i lanc zoom [$159.90] control instead, though notes that Sony may have a firmware update that will fix the problem.
HD Warrior: Review of the Sony HXR-NX70

HyperDeck Shuttle “User Review” £263 (Updated) | Philip Johnston } HDWarrior
Philip also reviews the Blackmagic Hyper Shuttle [$327.75], with some interesting results, particularly because he used it with the 8-bit NEX-FS100. In his samples, you can see a very clear image difference (though once you put your final image up on YouTube or Vimeo, the viewer may not see the difference!) He also notes the huge amount of space required. 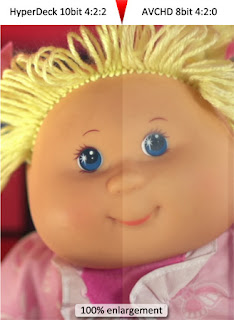 HD Warrior
Still, I'm interested because the differences he sees seem a little more noticeable than those observed by others.

Also, there's an interesting comment about using the footage in Final Cut Pro:


A word of warning if you take this into Final Cut Pro under ProRes 422 you won’t see any difference in picture quality.

DSLR: Get Steady with a Monopod | Robbie Carman & Richard Harrington
| Creative COW
A video tutorial talking about using a monopod for run and gun stuff. At the end they show a Manfrotto monopod with a fluid head, the 561BHDV-1 [$289.89] which is expensive, but a really nice looking piece of gear.

Demo/Q&A Friday: Introducing Muse | John Nack on Adobe | Adobe.com
If you're interested in the new HTML authoring tool from Adobe, there will be a webcast session with Dani Beaumont, the Muse Product Manager this Friday at noon (Pacific Time.)