Edward Burns, the Writer/Director/Actor who makes "those small talky New York movies about the Irish guys from Long Island," conducted an informal Q & A about his latest indie project via Twitter yesterday.

Burns first came to fame with the film The Brothers McMullen, which was shot on a shoe-string budget of $28,000, and though he's produced films on much larger budgets since then, he is now focused on very low-budget indie films; "I went hat in hand to the money guys for years. Just couldn't do it anymore. Decided to write smaller stories and never looked back."

The latest movie,  Newlyweds, just finished shooting, and is now in post-production. It was shot with a budget of $9,000 and a tiny crew; three guys rotated responsibilities. The plot of Newlyweds he describes as "they think they have a nice easy marriage. Then reality hits."

What follows is most of the tweets from last night (he also posted some photos from the production.) I've reordered the posts and made some slight editing changes to make it more digestable. But follow him on Twitter and you may learn other things about film making - and the film - like how the title Triangles of NY lost out to Newlyweds. He's also been soliciting poster ideas for the film's showing at the Tribeca Film Festival. 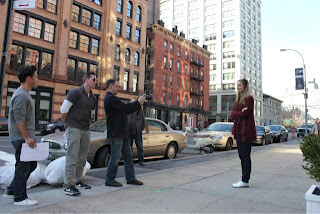 "Anybody can make a movie now. There are no more excuses."

Newlyweds started as workshop. Some scripted pages. We shot improvised scenes, rewrote, then reshot. then cut some sequences...Story then showed itself. Wrote more scenes, shot more scenes. Wrote the rest of the script over three months with actor input. Hard but fun

When we started shooting back in November, we didn't have a script and were thinking it might be a web series.

Our first day of shooting was a camera test a few days before Thanksgiving. Half that days footage made the cut. 4 months and 12 shooting days later we finally wrapped.

Ultra low budget filmmaking. Behind the scenes of Newlyweds. Indie film lives! This is the whole crew: http://yfrog.com/h0luahrj


Newlyweds shooting budget: 5k for actors, 2k insurance, 2k food and drink. 9k in the can. We only shot 12 days. That's how to make an independent film.

Got all locations for free, wore our own clothes, no hair and make up, no lights, no sound mixer, owned our Canon 5D.

Another behind scenes picture: http://yfrog.com/h8pduirj


Actors are all friends I've worked with before with the exception of Caitlan Fitzgerald - who is now a friend - and are all SAG. [You've] got to work with friends when you have very little money to pay them.

For audio we used these flash card recorders by M-Audio? I think that was the name. Set the levels and used lavs. Wish the digital revolution extended to location sound recording. Somebody know something I don't?

Lighting was mostly available light and practicals. On a few scenes we used a china ball

Here's another Newlyweds behind the scenes shot. Take notice of what you don't need. http://yfrog.com/h8sxnpvj


No boom (most days), no AD, no script supervisor. Three guys, rotated responsibilities. And a great DP.

We own the camera, sound equipment, and use Final Cut on my Mac.

Sound is important but don't let it slow you down. The Italian Neo-realists didn't and they made some pretty great films.

No disrespect to soundmen and women, but on these shooting schedules (12 days) you can't be precious. When I have a budget, I have respect

Shooting on the streets: http://yfrog.com/h2avnbwj


Anybody can make a movie now. There are no more excuses. True, you do need a few grand. But you used to need a few million.