With the ongoing tragedy in Japan, I've been watching a little more CNN than usual. I must admit I don't usually watch a lot of CNN, so I was surprised when I saw them using a camera stabilizer - like a Steadicam - to shoot some of the in-studio talent. 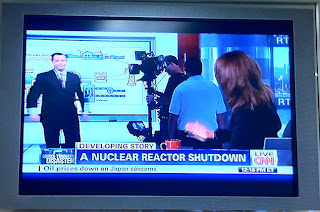 Perhaps this allows them to move more quickly in and out compared to a camera on a dolly? [Though obviously not fast enough as this shot shows! -Ed]

If you're shooting mainly static shots of talent - as they seemed to be doing - using a stabilizer does tend to make the video a little "floaty"; which is probably not desirable, though I really only noticed it after I saw the stabilizer!
Posted by Michael Murie at 1:00 PM