Ben Zidel is a young Boston-based filmmaker who's putting together plans to shoot his first feature early this summer. I talked to him about it at a recent Boston Media Makers get together. 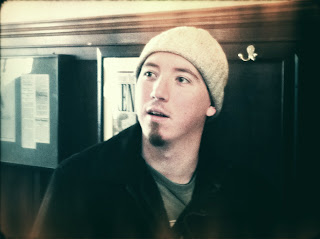 What's the story of the movie?
The story is called The Road Home. It's about what happens to two different people surrounding a tragedy. A girl gets killed in a hit-and-run accident and we deal with the aftermath for the driver, and we also deal with the aftermath for the boyfriend who lost his girlfriend. It's sort of how their lives intertwine and eventually come to a dramatic climax in the end.

Who wrote the script?
It's based on a short script and film that I wrote and directed, and my buddy Ray Lisi wrote the feature adaption of the short.

And you're planning to finance it yourself?
Yeah, we plan to do some self fund-raising through our production company, which we are starting now, producing commercials on a budget for local businesses. We are in talks with MyTV to do a television distribution deal with them, and do a theatrical promotion with the independent film series. So we'll be looking for local businesses to produce commercials for, and use that to underwrite the film.

When do you plan to start production?
We'd like to shoot at the end of May, but we might get pushed back based on money. Hopefully it'll be June at the latest.

Do you already have the cast?
No we haven't secured the cast yet. We'll hopefully be casting in April. Chris Polermo is going to be our casting director. He's a SAG actor, he runs Mass Movie Mavens, which is a pod cast which talks about film in the New England area, so he's got a very good network and he's going to hopefully bring in some good talent.

How long will the shoot run?
We're looking at about four weeks. It's a feature script so it's 127 pages right now.

Who's going to be editing it?
Right now we have our good buddy Heather Warren, she's one of our friends from Full Sail University, and she's currently in Florida, but it looks like she'll be our editor.

What are your plans for distribution?
We'd like to premiere it sometime in the fall on MyTV. We don't have a set date yet, but they're really looking for independent films and locally produced content to put on their channel. It's broadcast cable, which is pretty cool, they reach about 2 and a half million homes in the New England Area, and Chris Murphy, who's the head of television and film development there, he's pioneering this cool movement to put the money in the film makers pocket versus the festival's pocket, so there's some very interesting things there.

Are you going to do any film festivals?
It's possible. The great thing is we'll have sole ownership of the film, even if we show it. So if we want to go the festival route, that's certainly a possibility. We're also going to look into digital distribution, and any kind of cheap downloads that you can do, and exploring overseas, because the DVD market over there is great. That's the best chance to make money over there I think.

Is this your first feature project?
This will be our first feature, yeah. We did a short feature at school, while we were in class on our own time, and we did a couple of shorts in-between, and I'll be producing and directing some music videos coming up, but the idea is just to get our name out there and show what we can do. We'll be starting this production company here in the next couple of months and try to get as much content out there as possible. We've got another short film playing at the Auburn Film Festival in Maine in April, so we're just trying to get as much out there as possible.


You can find Ben on Facebook or at GrownUpBoyFilms.com. On Vimeo: Benjamin C. Zidel

Yes sir, Ben Zidel is prob one of the best people to work with ever. I've done work with him several times and his ability to get folks behind him on a project seems effortless. He is going to do MA well... I can promise that!