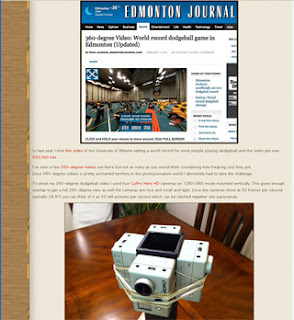 Even better, in his blog he explains the step-by-step process;


The short version of this story is that I shot with four GoPros, extracted still images from video, stitched the stills together into panoramas then recombined them back into video.
For the much more detailed and nerdy answer read on….

Read it to find out what software he used, and how many hours - and gigbytes - of data it took to produce!
RyanJacksonPhotography: Shooting 360-degree video with four GoPro HD Hero cameras

Shooting 3D Underwater
Want to shoot 3D underwater? Element Technica, manufacturer of 3D rigs says that its Technica 3D Neutron rig, mounted with Silicon Imaging SI-2K cameras, can now be enclosed in apurpose-built Neutron BORG 3D underwater housing system from HydroFlex. You can see a picture of it in the news report below...
Or you could buy four waterproof GoPros and make a 360 degree movie instead!
StudioDaily: Underwater 3D a Reality with Element Technica Neutron and BORG Underwater Housing