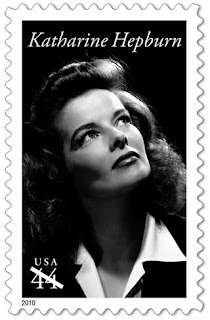 On what would have been her 103rd birthday, the U.S. Postal Service has issued a commemorative stamp for Katharine Hepburn.


"With the Katharine Hepburn commemorative stamp as the newest in our Legends of Hollywood series, we continue our proud tradition of honoring the special people who epitomize our nation's character and aspirations," said Postmaster General John E. Potter. "Katharine Hepburn will be remembered for generations, for both her unparalleled acting ability and being a role model for women who chose to live life on their own terms."

. It's interesting that in both movies she's starring with somewhat cantankerous leading men! Desk Set is probably lesser known, but if you like a comedy about computers putting people out of work, then it should appeal to you! Desk Set is only available on DVD, but The African Queen was recently re-issued, and is available on DVD and Blu-ray.]

Check spelling. Katharine is correct on the stamp.

Thanks, that's my daughter's name, too.