I was really taken by the Dynamic Perception Timelapse Dolly used by Sean Stiegemeier to shoot that volcano in Iceland nobody can pronounce the name of. See: Timelapse Dolly

There's not a whole lot of information on Dynamic Perception's website yet, but the More Information link worked[!] and they sent me the following details: 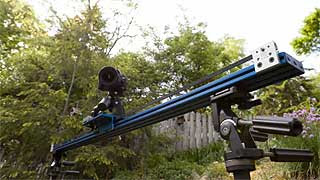