B & H has this habit of sending newsletters with articles about gear I immediately desire. It’s most disturbing. The latest issue includes a review of a Tascam field recorder that can record 8 tracks simultaneously. I have a couple of digital recorders, one even does up to eight tracks, but they both will only record two tracks at a time. Being able to record eight would be pretty useful, though that eight tracks is maybe a bit bogus; the DR-680 has only four XLR inputs and two 1/4" mic/line inputs. The last two tracks are S/PDIF, so for a lot of situations it's more like a 6 track recorder. Still, 6 tracks is pretty impressive. 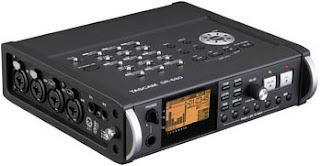 The Tascam DR-680 can be used without a mixer, though I wonder if people in the field will be happy about the fact that there aren’t separate level controls; it looks like you have to select the track and then use the single control to adjust level. Saves money I guess, but will mean spending more for a mixer for some applications..


Oh, and if that doesn't excite you, maybe you’d like a ribbon mic? There's a comparison of several ribbon mics in a separate article. These ribbon mics aren't cheap (the cheapest is about $700) but they certainly do a nice job recording a cello; there's quite a noticeable difference in the sound to a regular condenser mic.