What will Sony announce at NAB? 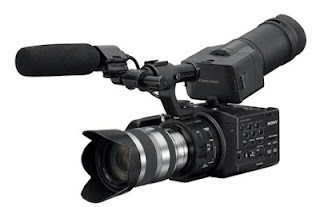 Hot news for those waiting for NAB announcements; the Sony leaks have started appearing!

My source (based in Taiwan) says that the FS700 does 4K via 3G HD-SDI to an external recorder. The FS700 is said to include 3 internal ND filters yet retains the NEX E-mount. Looks like they found some space for those missing FS100 NDs after all!

They claim that it will be in the same body as the FS100; but this seems unlikely to me...it might resemble the FS100, but they'd have to do some surgery to put in ND filters. Of course, just because last year they told us they couldn't put ND filters in there because there wasn't enough space, doesn't mean that they won't suddenly be able to do it this year..


Meanwhile, SonyAlphaRumors reports that there will be new NEX cameras announced soon, including an "NEX-F3". There's no additional details, and I think the name is totally wrong; I can't see Sony announcing an NEX-F3; it would cause too much confusion with the PMW-F3...wouldn't it? They already have the VG models and the FS100, if they are going true 4K, you'd think they'd change part of the model number (unless it's a 4K chip, but still pumping out HD...)

And if Sony does come out with a 4K "FS100," what happens to the PMW-F3? Surely an upgrade to that won't be too far down the road.


The only other rumor I've heard is of a model that's less expensive than the FS100.

Armed with this information, you should be able to imagine just about anything...

UPDATE: I've already had an email from someone suggesting the rumor is basically correct. The "does 4K via 3G HD-SDI to an external recorder" may be an important note...