The Canon 5D Mark III and grading the C300 at BOSCPUG

I'm not going to write at length about the meeting as they were video taping it, so it's probably is going to appear on the web near you somewhere soon. But here's the pieces that stood out to me: 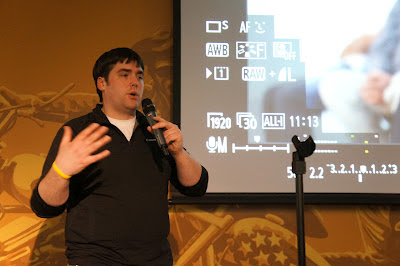 Canon 5D Mark III
Interesting aside: At the beginning of the meeting it was noted that Rule had two 5D Mark III bodies available for sale. By the end of the evening, at least one of those had been sold!

Rob Bessette talked about color grading the shot video "Hustle" that was shot on the Canon C300. Rick Macomber, DP for the project, and Dan Bérubé also talked about shooting the project.

I don't really have any tips from this presentation to pass on; just the one observation: I really should download the free version of DaVinci Resolve and give it a try!

Note: Rick has posted an excellent article about the production of "Hustle:" How a BOSCPUG Canon C300 test film became “HUSTLE”