The resolution is not compromised although there is some aliasing on horizontal lines and false colour moire on very fine fabrics. The issue doesn’t seem as bad as on the Canon 5D Mark II or 7D from what I’ve seen but it is there if you look closely. To be fair though it does not flare up as easily as some cameras do.


Jeff Heusser shows us a great workflow for geotagging in Lightroom 4. This is a perfect approach for your next location survey. Jeff recently flew up to Adobe and did both a geotagged photowalk and sat down with the great team there. As a bonus, Jeff shows how this can then integrate with sun position apps like LightTrac and other apps on the iPad or iPhone.


All I had to do was create a 1080i/59.94fps project, AMA the footage into a bin and edit in that format. Avid automatically does a pulldown motion effect on any mixed frame rates on the timeline. I will say though that in my opinion the pulldown that was done with the JH-3 HDCAM deck is more “solid” then the software based motion effects you get in Avid.

"Sprung Spring" - shot on the iPad3 (new iPad) with the Padcaster
| Manhattan Edit Workshop | Vimeo
Shot on the iPad; pity it wasn't entirely edited on the iPad!:


Video test shot with an iPad3/new iPad and "The Padcaster", a prototype video rig built for iPads, tablets and phones.


Imagine that you have some rumble or hiss in a section of audio, but no other sound. Then there is dialogue, but the rumble or hiss is still there. By capturing the noise print from the section with only rumble or hiss and then applying noise reduction based on that print to the other areas of the audio clip, you could do a pretty good job of removing it from the clip without risking affecting the other sounds, as might happen if you used filters or EQ.

12 Tips for Better Film Editing | Oliver Peter | digitalfilms
A post from a few years back that gives some good advice on editing:


1. Cut tight – The best editing approach is to cut tight scenes without becoming too “cutty”. This means taking out unnecessary pauses between actors’ delivery of dialogue lines. Sometimes it mean tightening the gaps within dialogue sentences through the use of carefully placed cutaways. It may also mean losing redundant lines of dialogue, after the director has reviewed your cut.

Theaters will charge premium on 2D movies in order to lower the cost of 3D movie tickets | Cory Doctorow | Boing Boing
I wasn't a fan of 3D before; and now even less so:


As Roger Ebert put it, "Oh, no! In a move to recoup their unwise investment in 3D, theaters discuss, and I quote, 'patrons will have a single price for both 2D and 3D films. 2D prices will increase and 3D prices will decrease.' In other words, punishing those who dislike 3D." 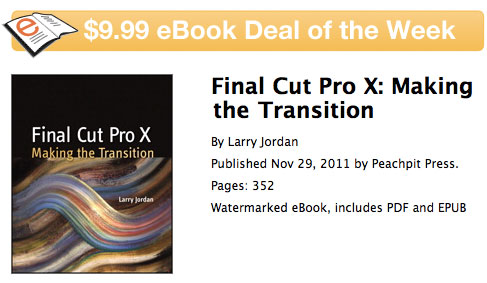