A few days ago I was asked whether the Canon HF G10 was a good camera for shooting short interview pieces, and I said I thought it was a great camcorder, though it lacks good audio inputs and won't give you the shallow depth-of-field of the large sensor cameras.

But then I got a follow-up question: would the HF G10 produce video that was good enough for broadcast TV?

If it's like most of my local TV station's, it will probably look almost as good as the stuff the station produces for it's news segments!; providing you don't make mistakes in how you use it. Backlighting or poor lighting, out of focus, or shaky camera work, those kind of issues will stand out more than the image quality itself

There are some exceptions: if you want to make a documentary for the BBC, then you might have a problem, because the camera doesn't meet their technical specs! The BBC - and many other large broadcasters - have guidelines about what acquisition cameras they will accept, notably saying that cameras have to support at least 35Mbps, though that doesn't mean they won't show programs with some material that's been acquired with unapproved cameras. And as long as the video isn't badly exposed, what they don't know, they probably won't notice! 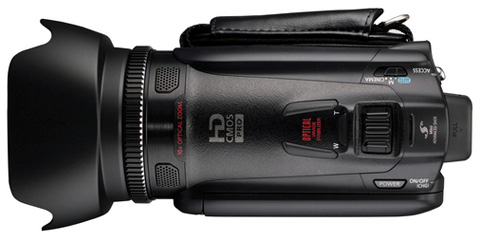 This camera should be able to do a very good job. Also, the truth is, if these clips are for submission to local news programs, then their chance of airing are more likely to be driven by the subject and how compelling the content is, than they are by the picture quality.

The other problem is that the next jump up is to cameras in the $3,000 to $4,000 range, like the Canon XF100, and I actually doubt that there's that much visual difference between the two. I suspect that the average man-in-the-street would not be able to see a difference between the image quality of the HF G10 and many pro-cameras under $5,000. The XF100 and the HF G10 (& XA10 the "pro" version of the HF G10) share the same sensor, though the image processing, and the file compression are different. The HF G10 uses 24Mbps AVCHD, while the XF100 uses 50Mbps MPEG-2, and supports 4:2:2.

I would worry more about how you use the camera, than the camera itself.  Concentrate on getting the lighting and exposure right, camera work, and getting good sound, and that will make a much more dramatic difference

Just this week, Philip Bloom posted a review of the Canon XF105 / XF100, and the Canon XA10 and he basically says that the image quality of the XA10 is as close to the XF105 as makes no difference. He does point out one other "limitation" of the XA10/HF G10; all those manual controls are managed through the touch screen, rather than through buttons and controls on the cameras body. But that's expected given the size - and cost - of the camera.