Sony will stop manufacturing the MiniDisc Walkman in September. It's unclear if that means they have ceased manufacture of all MiniDisc devices, but it's probably as close as makes no difference. They do say that - for the moment - they will continue to manufacture the MiniDisc discs, but the format is definitely on it's last legs.

Not that it was ever that popular.

I have a Sharp MiniDisc recorder that I bought probably 15 years ago; before the solid-state digital recorders became available. It worked well; I particularly liked that your could jump from track to track rather than having to fast forward with a tape recorder. The other advantage was that the MiniDisc's are "relatively" inexpensive, and you could use them to archive the audio you recorded. 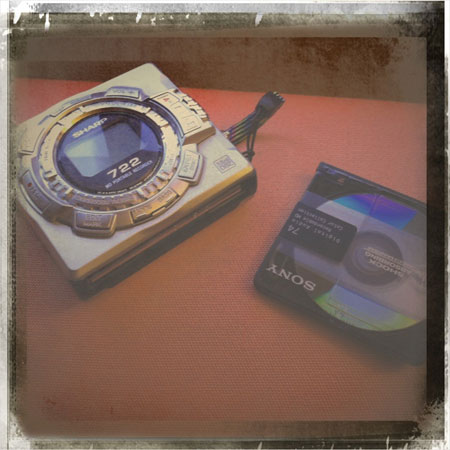 Sharp MiniDisc Recorder
With the availability and falling cost of solid-state recorders, I bought a solid-state recorder about five years ago, and the MiniDisc recorder hasn't gotten much use since; though it appears to still be in working order! The truth is, it is much easier to get the audio into the computer from the solid-state digital recorder, than it was from the MiniDisc recorder. There was no way to connect the player to my computer and transfer the digital files. I believe that Sony later made it possible to connect their portable players to your computer, but by then it was too late.

MiniDisc was also interesting because I think it was the first encounter with audio compression for many of us; up until then, computer audio was "compressed" by simply lowering the bit or sample rate. MiniDisc's use ATRAC audio compression. When Sony rolled it out, they claimed that you could not detect the difference between CD audio and MiniDisc audio. I went to an event where Sony played audio from a CD and then a MiniDisc, and they asked the audience if we could tell the difference. It wasn't a true blind test, and the audio acoustics weren't ideal in the convention hall, but even so, only about 5 people in the audience of 200 put their hand up saying they could tell the difference.

I figured at the time that a larger percentage of the population thought that Elvis was still alive, so maybe they were on to something!

But, it turned out no one really needed the MiniDisc. The CD was fine for buying and playing songs, and not many people bought MiniDisc for recording.

And then came MP3.


Source: CrunchGear: Sony To Kill The MiniDisc Walkman In September
Posted by Michael Murie at 9:00 AM

I was a huge MiniDisc advocate. But like so much of their predatory and suicidal corporate behavior, Sony saddled the medium with ridiculous rights-management, and even though ATRAC was (and might still be) the best audio compression codec available, you couldn't just drag stuff over -- and even using the SonicStage software, there were severe limitations on copying of even your own purchased music.

Sony deserved to lose this battle, and to suffer the humiliation of losing the trademark value in the name "Walkman."

Sadly, though, I burned my entire CD collection into ATRAC Advanced Plus or whatever, and now it's useless. Converters from ATRAC formats to MP3 were laughably primitive.