Yes, everyone is going to get sick to death of these iMovie trailer templates, but I have to tell you, I just spent an hour or so editing together a little trailer using footage from my sister's recent visit to Boston, and it was a lot of fun. (Don't worry, I'm not going to put it up on YouTube!)

It reminded me yet again that a really good piece of music and some appropriate graphics can turn pretty average footage - really average footage - into something spectacular. Actually I had a blast, and kept playing it over and over as I adjusted it. Most of the time was spent in picking clips, adding video filters, and finding appropriate gag names for the credits (the Car Talk site was a great help with this!) 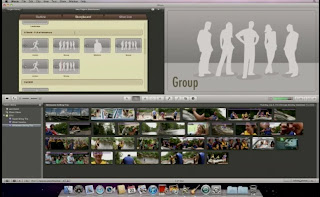 But there is a freshness dating on these trailers; I figure we'll only have a month or two before everyone has seen at least one, and you'll probably only get away with making one or two of these before everyone gets sick of them. So the sooner you do it, the better!

I'll also probably use the fake movie studio opening logos a few times for other things; but where's the Movie Rating Cards?

And one worrying note: iMovie 11 generally worked well, but at one point it froze my machine solid; which is not something that has happened in a long while. I'm not sure what happened, but I had to force a hard restart to recover. Fortunately, the project was saved (iMovie opened with no Project displayed, but clicking the Project Library button brought up a list of the one project I'd created, with my project safely there, and I didn't lose any changes!)

Posted by Michael Murie at 4:00 PM