There's something about old cameras that seems to attract people... 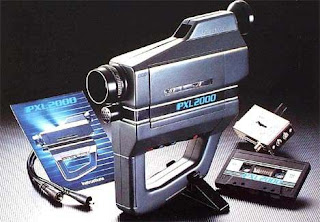 In 1987 Fisher-Price started selling the PXL 2000, a toy camera invented by James Wickstead Design Associates (JWDA) for under $100. The plastic camera recorded audio and video onto audiocassettes, and according to JWDA was the lightest, least expensive and easiest to use camcorder on the market at the time. More than 400,000 units were sold before it was discontinued in 1989, and it clearly inspired many.

[Okay, so without being a wet blanket, and acknowledging that often art can be improved by the obstructions around it, I can't help thinking that it's better to film something as well as you can, and then run it through a filter or other post process to give it the "look" you want; rather than use a camera that creates distortion or grainy images you have no control over...]
Posted by Michael Murie at 10:30 AM