Fujifilm already has a (relatively) inexpensive 3D camera (the Fujifilm Real 3D, which I haven't heard a peep about since it was announced) but now DXG has a $400 3D camera coming out sometime in June.

It looks weirdly interesting; but if those are the two lenses on the front, they are much closer together than the Fuji's and I wonder how good the 3D effect is. 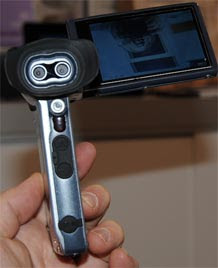 And I wonder what editing the video is like? Can you do it in a regular video editor, or do you have to use something that recognizes the files these cameras create? Or are you just stuck with what you shot?
Posted by Michael Murie at 1:44 PM