I keep getting the wrong book

A while back I set out to learn Apple’s Motion 4 program using the book Apple Pro Training Series: Motion 1. It actually worked out really well. Even though newer features like the 3D camera weren’t covered, I got enough out of it to actually start doing some useful things with the program.

At the time, I was tempted to buy the new book for Motion 4, but the cheapskate in me decided to get the Apple Pro Training Series: Motion 4 Quick-Reference Guide

instead, figuring it might be just as useful to me having a Reference Guide to answer questions as I encountered them, rather than doing a series of new exercises.

Unfortunately, the original publish date of the Quick Reference Guide has been pushed back a couple of times (I think it was originally supposed to be out before the end of 2009) and the current estimated date is sometime in April.

Meanwhile, every day, Amazon tempts me with their Gold Box deals; which usually means a dollar or so off something from my wishlist, or an item similar to something I previously purchased. Yesterday, they were offering $2 off the Apple Pro Training Series: Motion 4

book. Having nothing better to do, I went and looked at the chapter list and decided that it was sufficiently different from the original edition, that maybe it would be worth spending the money and spending some more time learning the program. 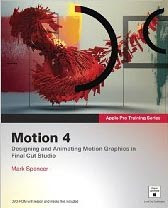 Remember when I said that the Goldbox often offers a deal on an item similar to something I previously purchased? Today they offered a book called How to Cheat in Motion

a book I had never even come across before, and – a curse on them - I’m starting to think that I ordered the wrong book.

Now if you don’t know how to do anything in Motion, then definitely get the Apple Pro Training Series book, because it shows you all the basics. Rather than teaching you the principles of the program, How to Cheat in Motion shows you how to do a series of effects. As one example, here’s Chapter 5: Breaking Up 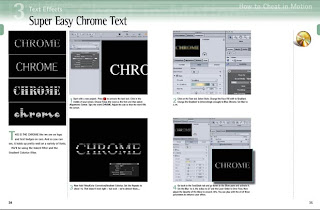 Sample Page - How to Cheat in Motion

Now I’ve only seen the chapter list, and a sample page, but this book looks more interesting to me than the book I just ordered. Oh well. I’ll stick it in my wishlist and come back and get it another time. 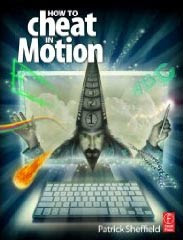 Posted by Michael Murie at 7:21 AM