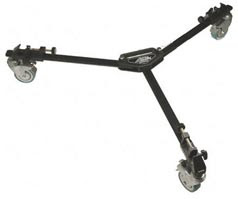 You can actually buy an inexpensive dolly to use with your tripod for less than $50; but these will only run smooth – and even then it can be difficult - on a really smooth surface (forget using on carpet, or going outside on concrete.)

“Real” dolly systems require a track of some kind; particularly outside. Several “do-it-yourselfers” have built some form of Dolly. These usually consist of the following three important parts:
Put like that, it seems quite, simple! But what to make the track out of?

The latest idea, from "Romain" on Ikea Hacker, is to use the Ivar “wooden ladder” as the track, and build a trolley that runs along that. Quit an interesting idea; the Ivar “track” comes in lengths up to 89”. He has a nice sample video on Vimeo too. 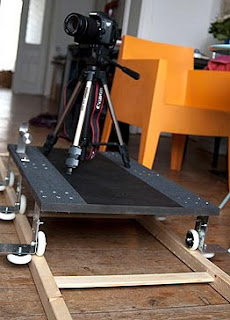 In addition to the Ivar piece, he explains that you need:
Derek Beck came up with a different solution with his PVC Dolly. He appears to use metal pipes as the track, and recommends poly-urethane wheels, going on to say: (they are softer and run smoother and quieter), and don't waste your money on designer wheels.

The problem with the pipes, is that you need some way to keep them from bending and a consistent distance apart. 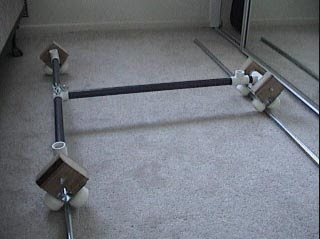 Going in a different direction Ted Ramasola built a plywood skater (NOTE: The actual Skater (TM) is made by P+S Technik; it’s much more refined, but much more expensive!) The Plywood skater also uses the skateboard wheels, but this is in a small device you can slide across flat surfaces. Just take a piece of flat board and set it at the height you want. You wouldn’t want to put a tripod on it (unless it was very small), but it might actually be easier to work with. 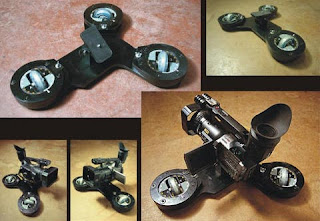