Gizmodo can be a great source for new gadget info, but sometimes they seem to go off on a tangent. I do that too, but I don't have an editor! What's their excuse?!

Their latest piece to catch my eye: a Sony rep can't explain why they have 17 new cameras and camcorders in 10 seconds...so obviously they don't know what people want! Now, why the guy didn't just say "People want choice in features and price," or something like that, I don't know. Perhaps he was thrown because he assumed he was going to get a serious question? 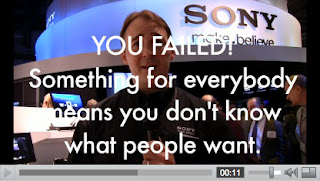 But seriously; Given 10 seconds, could a Toyota rep explain why they sell 18 different vehicles in anything less than platitudes? And by my count, Canon announced 12 new camcorders, and four cameras, for a total of 16. I guess more hilarity will be ahead if Gizmodo managed to get to the Canon booth.

Of course, I'm biased. I just did a rough count and I think I own more than 10 cameras and camcorders. I hope someone from Gizmodo doesn't ask me to justify that in 10 seconds; I'd probably do an even worse job than the Sony guy!
Posted by Michael Murie at 8:00 AM