Premiere Pro Basics (CS6 & above): 23 Dynamic Trimming
In this tutorial, Andrew Devis looks at a couple of options that can help you to see your edits dynamically as you edit them. Andrew shows how to use and edit the 'Play Around' function as well as using the 'Loop' function so that the play-head will play a specified amount of time before and after it was placed allowing you to place it over (and edit) transitions on the fly.

ADOBE Premiere Pro CS6 “Not impressed so far” | Philip Johnston | HD Warrior
Meanwhile, Philip has encountered some issues with upgrading to CS 6, including tech support problems; "Why do Adobe employ these people who clearly do not know what they are doing," and hardware compatibility issues:


The Quadro FX4800 for Mac was available May 2009 and there is no mention of this card not being compatible with MacPros pre 2008 other than small print on the Nvidia web site that I have not been able to locate yet !

How Mac OSX still *screws* your GH2 / FS100 / NEX footage – A must read!!
| Andrew Reid | EOSHD
Andrew is seeing some sort of gamma shift issue when working with NEX-FS100, GH2 or NEX AVCHD footage. He recommends transcoding to ProRes using the 5DToRGB utility:


I’ve had my suspicions for a while now about AVCHD footage having a different exposure on my Mac to on the camera. When I edit my GH2 and FS100 stuff natively in Adobe Premiere Pro CS5.5 or the new CS6, or preview AVCHD MTS files in VLC Player (Quicktime X still does not support AVCHD) blacks are crushed and the image is darker overall with far less shadow detail than on the camera’s LCD.


Ion Air Pro, the base model for $230, ships with a mini tripod, travel power adapter, USB and AV cables, and a Cam Locker and pouch. The Ion Air Pro Plus, for $290, adds to the previous package a CamLock system, mounting hardware that secures the camera to a variety of bike handlebars, sports helmets, poles, and boards. [...] The Ion Air Pro Wi-Fi, for $350, offers all the elements included in the Plus package and adds a Wi-Fi feature

Roku HD | Matthew Moskovciak | C|Net
Ever wondered what the difference between the Roku HD Streaming Player and Roku LT Streaming Player were? This review does too (though the price's seem off to what I currently see on Amazon.):


The good: The Roku HD is an extremely small Wi-Fi streaming-media box that costs only $60. It offers dozens of streaming video and audio services, including Netflix, Hulu Plus, Amazon Instant Video, HBO Go, Pandora, Mog, Rdio, and MLB.TV. PC- and Mac-based media can be streamed via the Plex app. The Roku HD can be connected to HDTVs or older analog TVs.

camRade WS C300 wetSuit (Black) | B & H PhotoVideo
Canon C300 user Paul Antico pointed out this rain shield for the camera which is available for $199.95:


The black WS C300 wetSuit from camRade is a soft flexible, waterproof camcorder cover designed to fit a Canon EOS C300 camcorder. The cover has vinyl windows to view the controls. It is made of a material that reduces noise from wind and rain. The cover has elastic and zipper closures. 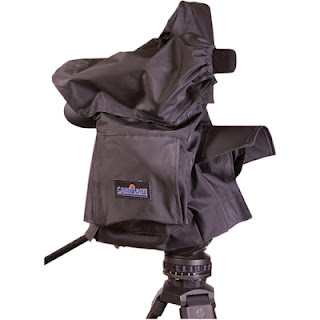 
A good video always feels like a personal invitation. There isn’t anything necessarily bad about shooting an interview with yourself and your guest fully in the picture – professional event newscasters have to do it all the time. What they know is to always first position their body to camera while introducing their guest, and only turn when the introduction is completed.

Posted by Michael Murie at 7:05 AM