Yesterday I sat in on a Webinar on SpeedGrade given by Product Manager Patrick Palmer. For those that haven’t heard, SpeedGrade is the color correction tool that Adobe acquired recently and have added to their Creative Suite CS6. 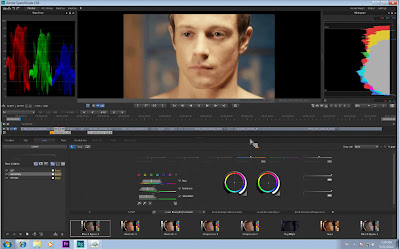 Interface
If you’ve seen other Color Grading tools like DaVinci Resolve or Apple’s Color, then SpeedGrade will seem somewhat similar with it’s primary and secondary layers, color scopes and three-way color corrector. It’s also different in that it doesn’t have some of the unusual interface elements; like the nodes for organizing effects in Resolve.

Does this mean it’s easier to be a color grader in SpeedGrade than in the other tools? While it may be a little less intimidating to use, particularly as it’s interface more closely resembles Premiere than say Color resembled Final Cut Pro, it’s still an extra, complicated step that’s more art than science.

Like other CS6 tools, you have a project panel on the left, timeline at the bottom, and viewer in the middle. Hover scrub is even implemented for thumbnails. You can display scopes in panels and rearrange where the panels are displayed; Patrick said he likes to keep the waveform panel on the left-hand side of the screen.

Getting to SpeedGrade
There are multiple ways to go from Premiere Pro to SpeedGrade. One is the function “Send to SpeedGrade” This creates a folder and copies all of the media to DPX frame sequences. The advantage of this is that it applies Premiere Pro effects, like the Warp Stabilizer, to the footage. However, this process can consume a lot of disk space; particularly if you use ProRes or AVCHD material, where the file size can “blow up.” The conversion can also take considerable time, so while it’s recommended for short sequences of a few minutes length, for long form subjects, you should use another method and export using an EDL. Exporting to an EDL is faster, but has it’s own limitations; it doesn’t copy across effects, and SpeedGrade doesn’t support all of the file formats that Premiere Pro currently does.

Grading
SpeedGrade can handle multiple primary layers - as many as you need - and as many secondary layers as you need. You can add color effects using Look Up Tables, and adjust the transparency of a Look Up Table to adjust the amount of an effect. You can copy looks from one clip to another with the press of a key. Speedgrade does not support curves, but Patrick noted that “a lot of things you can do with curves you can do with the color wheels. “

One interesting interface feature is the idea of a grading track added to the timeline that controls and indicates the length of an effect.

SpeedGrade will let you preview up to nine shots at once, and you can preview different sections of the same clip, though performance may be an issue.

Performance
Playback performance depends on system performance; your GPU etc. Patrick said that he runs it fine on a MacBook Air for designing looks on-set, but don’t expect real-time playback and to get reasonable performance you should set the playback resolution lower (it’s a playback option.)

SpeedGrade, he said, has fantastic realtime capabilities with the appropriate GPU and he recommends nVIDIA 4000, or 5000 cards. For output, they only support nVIDIA cards at the moment; “Blackmagic and AJA don’t work as they are in conflict with the way we use the GPU.”

The control surfaces they support are the Tangent Wave and Tangent CP200 series of control panels. He added that they are looking at adding more support for hardware but they were limited by the fact that they only had six months from acquisition to first release! 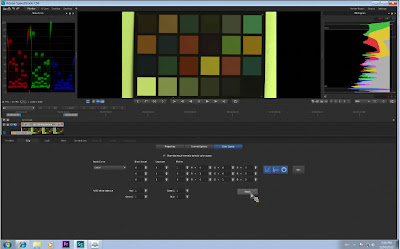 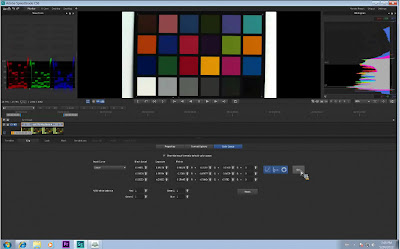 Using a Color Chart to correct color
Science Fair
One feature I found particularly interesting Patrick referred to as a “science fair.” Using footage of a Macbeth color chart, SpeedGrade analyzed the footage and worked out the color space correction to get the footage color neutral. This may not get you to your final look, but takes the footage to a neutral color balance and can be especially useful for matching two cameras.

In Conclusion
I’m pleased that Adobe has added a color grading tool to their suite, and while I’ve seen some mixed reviews of this - virtually - 1.0 release, I expect that they will add to it’s power in future releases. However, the copying and converting across to SpeedGrade process seems to be a time consuming and sometimes troublesome task. For the serious color grader this may not be an issue, but for the average NLE editor who just wants to do some simple color correction, a plug-in that works within the NLE may be a quicker, simpler and easier to use option.

Great summery. I missed the webinar. Any chance you know if the recording is available somewhere?

I don't know. They did make available the recording of the Prelude webinar they did in the same series, but I haven't yet found a link to any of the others.

I just found this post, googling around my comments here .. http://www.bmcuser.com/showthread.php?1302-Mixing-RED-Scarlet-footage-and-BMCC-footage&p=26940&viewfull=1#post26940

I see shooting a card as important (or more) than using a slate!