As good as in-camera stabilization and FX stabilization software might be, getting a good, steady shot can still be difficult, especially if you’re holding the camera for long periods of time. That’s why tripods are still vital pieces of equipment.

But a good tripod can be large, heavy, awkward, and require large amounts of space to setup. That’s why I’ve been intrigued by the idea of shooting with a monopod. I recently spent some time with the Manfrotto Video monopod, and while I don’t think it’s perfect for all occasions, I can see it as a useful tool for certain situations.

At almost six and a half feet when fully extended, it's a seriously tall device!
Design
The Manfrotto 561BHDV1 monopod features a very thick and sturdy support arm made up of four extensions. These are released using clip-releases that are easy to release and set; a necessary feature for those working quickly or in tight spaces. Most impressively, it extends to 6 feet and 5 inches tall; taller than any tripod I own.

The three legged base provides a very positive support for the arm on solid surfaces. I didn’t try it in sand or mud and I’m not sure I’d really want to risk it in those locations, though you could probably use a plastic bag to protect it in those situations. 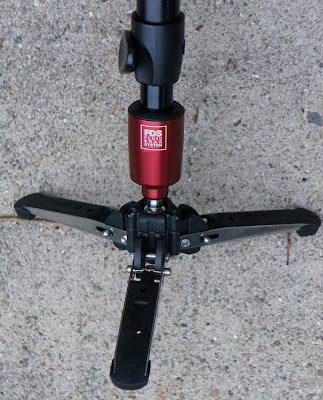 The base joint and feet
The HDV head on the top of the monopod seems to be identical to the Manfrotto 701HDV [$132.99] tripod head, and is smooth and easy to operate. It has a bubble for checking level, though it’s location - you have to look down on it to see it - probably means it won’t get much use while actually shooting, and to be honest, I'm not really sure how useful a bubble level is when operating a monopod. I have a couple of Manfrotto tripods, so I’m used to their design and functionality, and I like their operation. They may not be as good as the high-end tripod heads, but they strike a good middle ground for price and performance.

In Use
The first thing I noticed about the monopod is that the head does not rotate at the top. Instead, the arm itself rotates in the base of the monopod. I have mixed feelings about that.  This means that if you want to do a pan, you have to rotate the entire arm, and this means slipping the arm by releasing your grip slightly on it to allow it to rotate. That just seemed a bit awkward to me. I’ve never used a monopod before, so I don’t know whether having the head rotate on the top of the arm would cause some other issues, but I feel like that would be preferable over having the whole arm rotate. I was still able to operate the monopod without much difficulty. 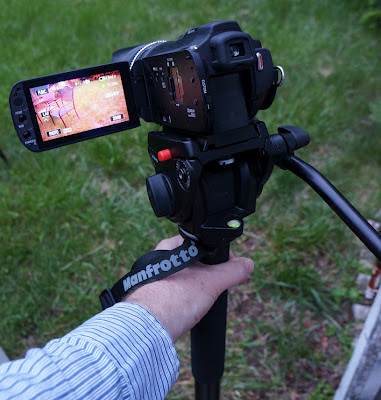 When panning you have to release you hand to let the arm turn.
The second issue I noticed almost immediately - and this is a monopod issue, not something related to this particular monopod - is that you really need some sort of remote control for your video camera. Since you’re using one of your arms to swing the head, and the other to hold the monopod, it’s very hard to zoom, adjust focus, or even start and stop recording. You can do it with the hand being used to stabilize the monopod – provided you’re not in the middle of doing some sort of camera move.

Finally, this monopod has a detent in the base that keeps the arm centered. The arm will actually stand upright without support on a flat surface if it’s centered on the base; and you’re careful. I found it even did that with a light camcorder onboard. I’m not sure that’s a good feature to use; I’m sure the camera will fall over at some point!

But the problem I found with this feature is that if you are swinging the arm – particularly if you are moving it slowly – there can be a slight jump or shudder as the arm goes into and out of that centered position. The net result can be a shake in your camera move unless you keep the arm perfectly centered, or avoid the center entirely.

That being said, this monopod is relatively light - given it's size - and extends very high, making it possible to shoot with the camera high up for long periods of time. I could hold a camera that high, but not for very long, and it wouldn’t be nearly as stable. Tilting up and down is smooth and easy, and panning mostly worked well, though occasionally I’d be flummoxed by that center detent.

In reading up on the monopod, I discovered others have issues with the base. Some people have talked about tightening it so that it's possible to leave it free-standing with a camera mounted on it - I wouldn't recommend doing that - while others are spraying it with WD-40 to make it looser. Each to their own; there probably isn't a unit made that suites everybody's desires. As this was a review unit, I didn't try either option.

Conclusion
This is a well-made and solid monopod. Considering its size it is not that heavy; particularly compared to a tripod of similar size. Operation is smooth and the tilt head works well. I particularly liked the ability to get the camera up high. My only issue was with a slight judder when moving through the central detent in the monopod base; the weight of the camera, speed and angle all determined how much of an effect that had.

While a monopod does not replace a tripod for everything, I do think it would be a useful addition to your kit. Because monopod’s are difficult to keep level and require you to use one hand to support the monopod, you’ll still want to keep that tripod. But if you’re shooting quickly in confined spaces, or need some sort of support but don’t have room for the weight and size of a traditional tripod, a monopod might be the perfect solution.


Update: I've collected together some comments from readers here: Manfrotto's Fluid Video Monopod followup
Thanks to:
B & H Photo Video, who provided a loner unit for this review.

Still Motion made an amazing tutorial on using this monopod: https://vimeo.com/26869155

I shot an entire short film with one of these and a 5D Mark III. it is best used as a replacement for a shoulder rig, not a tripod alternative. It's much better than hand held shooting when you want a "living camera" look but need stable support such as when shooting video with a DSLR and prime lenses. There's a reason Still Motion uses them for shooting weddings. They're great for documentary style shooting also. I've been borrowing one when I need it, but after doing my short film "Lipidleggin" with it, it's on my short list of next gear purchases.