Don't use auto aperture
If you have a Canon camera, don't use an automatic lens - or if you are, use the "disconnect" trick[1] to turn off the aperture control on the lens. Evidently, if the lens is fully automatic - all Canon's modern lenses are - and you are shooting at anything but fully open, the camera switches back to fully open after each shot, then switches back to the set aperture (say f/8) to take the next picture. But it might be f/7.6 for one shot, and f/8.1 for the next. This will cause flicker.
Ron showed an example video that had been shot at different apertures. The smaller the aperture (i.e. f/16) the more pronounced was the flicker problem (obviously, if you actually shoot wide-open, then the problem doesn't occur!)
This was news to me; I'd previously read that you had to shoot fully manual (i.e. set aperture, shutter and ISO) but I hadn't heard that you had to lock the aperture. This may explain why I was getting flicker back when I tried my hand at timelapses!

Planning ahead is really important
Whether it's knowing the time and place the sun or moon will come up, or knowing when high tide is, you need to plan. Also, make sure you shoot enough pre-roll and post-roll.

After Effects is his preferred application
Though he also likes Adobe Lightroom and a third-party tool called LRTimelapse, which lets you mark points in a sequence where color balance changes as key frames and adjust them in Lightroom, and then ramp the changes between the key frames. This requires sending meta data back and forth between the two applications in a few steps, and it sounds a little more complex than it is, but it seemed to be a really good way of adjusting color/exposure slowly over a range of frames.

Tom Lowe's website and forum Timescapes.org are a great resource. 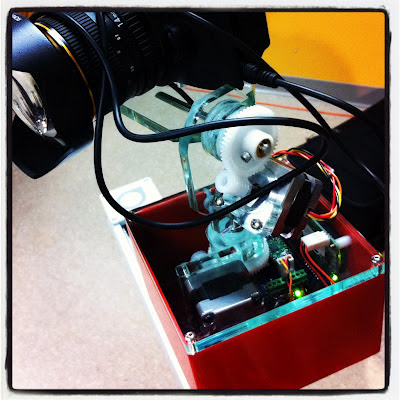 eMotimo
Ron also offered thoughts on what makes an interesting time-lapse, the settings he likes to use, and some guidance for Choosing An Interval (how often you take a picture.) Ron brought with him a couple of dollys and a pan-tilt head from eMotimo, which he said was very good, and not that expensive, though he didn't really talk at much length about using these.

If you're interested in learning more, Chris Portal has already posted an amazingly detailed report of the evening here: Pub Night: Cinematic Timelapses

And In Other News
Dan Bérubé of the Boston Creative Pro User's Group was at the event, and he had a Lytro light field camera, which he'd just received the day before. He gave a very quick demo, which - to me - wasn't that impressive, but he had only had it for a day, He did claim it was the "way of the future"; I couldn't tell if he was joking or not. 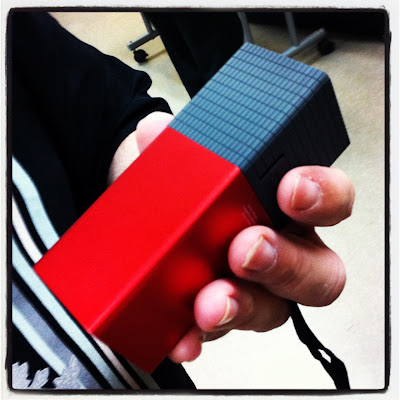 Lytro
Dan has sold his Panasonic AG-AF100, and he told me that he's still planning to buy a C300, but that he's now waiting until after NAB to make the purchase. In the mean time, he has ordered a 5D Mark III!

We had a long conversation about whether the Digital Bolex would become a reality. Dan's hopeful, and I'm skeptical!

And next week we'll be back at Rule Boston Camera, who is hosting the Boston Creative Pro User Group meeting on the Canon 5D Mark III and C300...Filmmaking with the Canon EOS 5D Mark III & Color Grading Your Next Project and Canon C300 Footage on "Hustle"

[1] To "disconnect" a Canon lens, choose aperture, then press the depth-of-field preview button on the camera, and while that's held down, release the lens and turn it until the aperture display goes 0.0 on the camera display. It's now disconnected, though the lens is still reasonably firmly in place. Just don't forget that you did this!