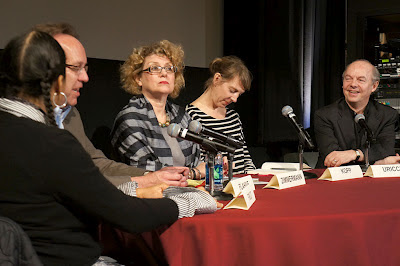 Last Tuesday I went to a lecture at MIT on "Documentary Film and New Technologies". The description was very promising:


Emerging digital technologies are opening powerful new ways to create and even to reconceptualize the documentary film. How will handheld video cameras and ubiquitous open-source computing change the nature of documentaries? What are the implications for makers and viewers of documentaries of today’s unprecedented access to online editing and distribution tools, to an ocean of data never before available to the general public?

I thought that there would be a discussion of new technologies (DSLRs! WiFi enabled cameras!), ubiquitous filmmaking (cellphones! iMovie for the iPad!), new distribution (iTunes! YouTube!) and unique sources of funding (KickStarter!) Instead I got a rather esoteric discussion on how traditional funding sources have changed a little, and hints at interactive media replacing linear storytelling - with a dash of maybe.

There were moments of clarity - particularly a short riff on the temporary nature of media - that I will excerpt in a separate post, but for the most part, I was surprised how seemingly off-topic the discussion was. Instead of a discussion of actual technologies, we found out how Public Broadcasting in Canada is still funding documentaries(!) and have started dabbling in interactive (I think web based, though it wasn't clearly explained.) It was interesting, but of little use to those of us in the USA, where thinking that public funding will expand is a pipe dream. We also learned a little about funding from the Tribecca Institute, and a bit about how Sundance is exploring interactive media, though again it was more an overview than anything specific.

Now, my understanding is that this forum came at the end of some daylong event, so it may be that I dropped in at the end of the conversation, and thus couldn't understand at all why the butler did it. But it might have helped if someone had shown some examples, or defined what they were talking about.

The most interesting comments were from Patricia Zimmerman, who as a historian, noted the history of interactive television, and how much of what people were "discovering" now, had really been done before in other forms.

But otherwise, it was a very academic, dry, discussion. Academic both in approach - more about formal development through funding or art institutions, rather than people in the trenches - as well as academic in the sense of distance from actual details of what actual people were doing. Or even how they were doing it.

In other words, it should have been broadcast on C-Span.
Posted by Michael Murie at 4:17 PM