Yesterday Planet5D held a live webchat with Steve Weiss, Director and Product Designer at Zacuto. The replay of the chat should be up on Planet5D shortly, but here's a recap for those that didn't make it. 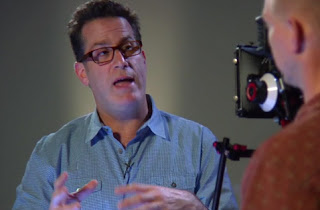 Steve Weiss
On price
Mitch from Planet5D opened up the chat by asking Steve about the price of Zacuto gear, noting that some consider it expensive.

"If you look at our kits. We have kits that range from $500 to many thousands of dollars. We wanted to make our kits incredibly complete. Some of the other competitors, you have to buy another part, and another part.
We make them 35 miles from our office. If we have an idea [we can] have it done in 5 or six weeks.
We build our stuff to an indestructible military grade [and have a] life-time warranty."

He also sighted their tech support as another benefit they provide. 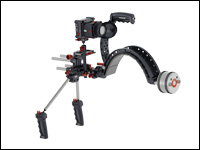 Scorpion Rig
Scorpion rig
Steve showed a new Scorpion rig, which is aimed primarily at DSLR shooters, and has an unusual curve plate that goes up-and-over the user's shoulder. This rig makes it possible to hold the camera lower, while still using the shoulder for support. The curve plate has a special foam underneath that molds to your body.

The rig will be displayed at NAB, but there isn't any price yet [see Update below -Ed] 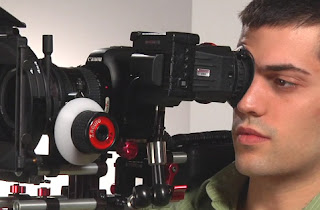 He had one on hand and demoed it, listing some of the many features, including an ability to auto-detect what camera is being used, and adjust the image on the screen with pillar-boxing on the left and right side accordingly. You can manually go in and scale the image any way you want, or set it to fill the entire screen

There are two full sized HDMI’s with pass through, and a USB slot for upgrading firmware.

It comes with a charger and a Canon LP-E6-style battery (it's a third party battery.) An 18" HDMI cable has swivels at each end, and also included is a case and a mount.

It will do audio monitoring (displayed onscreen), but doesn't do audio pass-through. He contended that this would have added to the cost, and if you're serious enough to be using pass-through, you'll probably be doing dual sound anyway.

When asked why two parts, Steve said that it was so you have options. Also, existing customers can use their existing Zacuto Z-Finder with it.

There are 3 anamorphic squeeze options: 2x 1.5x and 1.33x anamorphic, and also a frameline generator.

Someone asked how reliable the focus assist peaking is, and he said it worked very well, and you can adjust the sensitivity, so that the edges that are in focus will be enhanced.


It’s not the camera that makes the filmmaker. It’s your idea’s and the content and your writing, and your lighting and all that. 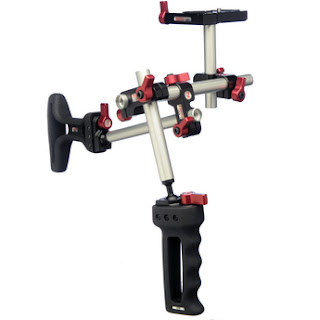 Little Known Fact
The name Zacuto was taken from Abraham Zacuto a Jewish astronomer, astrologer, mathematician and historian who served as Royal Astronomer to King John II of Portugal.


Other Projects
He showed a new grip "cover" which adds more cushioning to a handle. When asked whether they'd considered doing some kind of camera stabilizer, he said that Glidecam and Steadicam have got that down. "Why would I even try to make one?"


On the movie business
Steve spent some time discussing their web productions - both past and present - and advocated using the web and webisodic series as a way to get your content to viewers. He pointed out that comparatively few movies actually make it out to theaters, and that "you can’t get millions of viewers in the movie theaters" anyway.


Why do you kids on the internet think it’s better to make a movie than to make a webisodic series?

He felt there were other ways to be creative and get produced. Pointing to some of the projects that are coming to the web (like Kiefer Sutherland's latest web-based project) Steve suggested that somebody needs to go to a company like Staples and tell them they should finance a television series, but have them host it on their site. Tell them: "Wouldn’t you rather have somebody watching content on your site than off your site?"

Planet5D
Zacuto Z-Finder EVF
Posted by Michael Murie at 11:00 AM