What ProRes codec to use with DSLRs?
If you're a DSLR user editing with Final Cut Pro, you know that for best performance you have to transcode to ProRes. But the question is: which flavor? Because there's several of them:
Steve Sander has done some tests using footage from Canon DSLRs and writes about it over at Converge. He actually sees little visual difference even between LT and HQ, but recommends using ProRes 422 "normal" in most situations. I happen to think it's great advice; given that I use normal all the time...
Check the article for the exceptions!
Converge: The best ProRes codec to use when editing 5D and 7D footage
Apple: Final Cut Pro 7. Expanded ProRes Family

Here comes the Ninja
The Ninja, a digital recorder that captures HDMI output to notebook HDD or SSD drives in ProRes format (it's a competitor to the AJA Ki Pro) should be available shortly. But David Fox at UrbanFox.tv reports that Canon DSLR users maybe less than impressed with it because:


...it seems that Canon has put at white square or a red dot on a corner of the output, which will be noticeable if you try to use it as full HD

The thing is, no Canon DSLR outputs full HD anyway, so I'm not sure why anyone is that excited about capturing the HDMI output with one of these anyway.

Maybe for a few people, it makes sense...

But if you have a camera like the Sony HXR-NX5u, which outputs full HDMI in better quality than it stores internally, now that might make some sense. 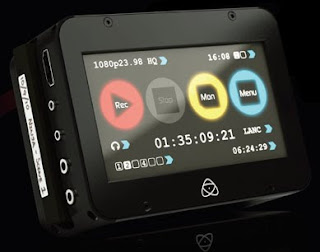 Panasonic AG-AF100 News
After using HDSLRs for a recent shoot, Cinematographer Rich Lerner - who's worked on a number of documentaries in his 25 year career, including A Story of Healing and The Urban Elephant - says he plans to use the AF100 for his next project. Panasonic wants you to know.
CriticalView: Cinematographer Spotlight: Rich Lerner

Snehal Patel Panasonic AG-AF100 workshop
If you're in LA and want to learn about the AG-AF100 from the ground up, this might be worth attending. The linked page lists everything that will be covered.
Date & Time: Sat, Feb 26, 12:00pm - 6:00pm
Location: Stray Angel Films, Los Angeles
Cost: $400
PhotoCineNews: Panasonic AG-AF100 Workshop with Snehal Patel