Noise Industries kindly sent me a copy of the new filter set PHYX Stylist to try out. This set of filters consists of five effects: Cathode Ray, Fog Generator, Haze Removal, Skin Light and Sparkler Star. They are installed as part of FxFactory 2.5.5 - I already had FxFactory installed, but had to upgrade to get the new set - and you can get a free trial version.

Here's what I found:

Cathode Ray
This filter emulates a Cathode Ray tube. One thing I like about this filter is that it comes with several presets; including Riflescope, Night Vision and Old Television. All of the PHYX filters let you create and reload your own presets, but only Cathode Ray includes some presets when first installed.

This proved useful because I had trouble getting the vignetting effect (Optics Radius) to work and was only able to figure it out after choosing - and playing with -the Riflescope preset. Turns out that though the parameter has a value from 0 to 4000, it's only within a comparatively small range (about 200-600) that you see the vignetting effect. It' easy to miss when you're playing with the filter, trying to figure it out.

I wish they'd included some presets for the other filters as well (heavy fog, light fog etc.) It would make it both easier to learn what's possible, and also quicker to do basic effects.


Fog Generator
This is my second favorite filter of the collection. As the name suggests, it lets you create fog in varying depths. I did have a little trouble deciphering the Enable Depth parameter, which provides "a depth channel [that] may be used to control the amount of fog applied to your scene." Note: If you're not familiar with this concept, the best thing to experiment with is a black to white gradient that's the same frame size as the sequence.

Fog Generator has the most parameters, and also is the most difficult to really determine what you're doing without playing it back while applied to the sequence. 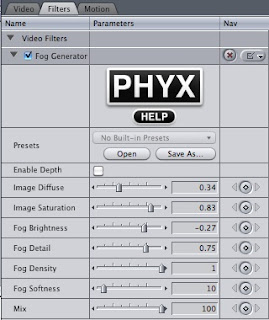 Haze Removal
This filter "simulates haze-removing photographic filters," and as such it seems to remove blue from the image and make the image warmer, though you can adjust it to select different hues.

In the example video below, you can see that it does some bad things to the grays in the image, but the bushes in the window's clean up nicely!


Skin Light
This filter adds color to skin tones, and you can choose a different color to "reflect" onto the skin tone. In the example video a little yellow is being added to warm up the skin, but you could use any other color. It's unfortunate about the orange shirt, but notice that the rest of the scene is essentially unchanged.

I have to admit, when I first started exploring these filters, this one interested me the least, but having spent some time with it, I'm thinking that it could be the one I end up using the most.


Sparkler Star
This is my favorite of the filters. It only has a few parameters, but you can create anything from a subtle sparkle to a giant wash of brightness

I know I'm going to have to be very careful not to over use this filter; I probably still will!


Help
As with the other PHYX filters, each filter links to its own help page that opens in the browser. All include a single before and after image, and short descriptions for each parameter, but some of the help is a little too vague. Under Fog, there's two parameters - Fog Details and Fog Softness - which both have a description ending in "generates less detail." I had difficulty figuring out what they both really did.

I would prefer a bit more of an explanation of how the parameter effects the results (i.e. use this to make the fog thicker, lighter, etc.,) rather than just what they do. This was particularly true for fog because you have to adjust the parameters, render and preview the result, then adjust and repeat.

That and and some presets would really help.


Any filter collection poses the question; am I going to get my money's worth? And often that boils down to; am I going to use all of them? and how often will I use them?

This set combines three very "in-your-face" filters, and two more subtle ones. Cathode Ray, Fog and Sparkler are dazzling, and I'd buy the set just for those three, but at the same time you probably won't use them every day. On the other hand the Haze Removal and Skin Light filters will be very useful for quickly manipulating footage, so while they might not jump out at you at first, they may get a lot more use.

But me, I'm off to add some sparkle to the project I'm editing...

NOTE: PHYX Stylist is included (as a trial version) in FxFactory, a filter architecture that works with Final Cut, Motion and After Effects. FxFactory is available from Noise Industries