The Mini is the smaller brother to AJA's Ki Pro, which captures to hard drives and is much larger and heavier than the Mini. At 1.2 lbs (vs. 6 lbs) the Mini makes it possible to attach the device to the camera itself, though unlike the Ki Pro, it lacks several features including the ability to up-convert and down-convert, analog ins and outs, and wireless support. 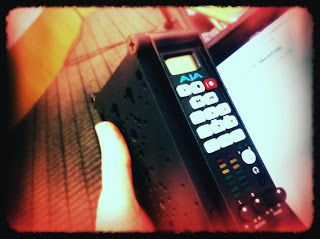 The Ki Pro Mini was announced a few months ago, but they've only just started shipping. According to Jay, one of the reasons it was delayed was problems they had certifying Compact Flash cards that worked with it. "We'd get it working with one manufacturers card, and then it wouldn't work with another," he said. They also encountered issues with cards that would work fine for 20 minutes, and then would start dropping frames. He said that they've already tested it with several cameras including the Panasonic AG-AF100 and the Sony PMW-F3.

Other important notes:
Local Reseller, Stuart Cummings of Watermark Productions was also at the event and talked briefly about using the Ki Pro Mini with DSLRs. He suggested that the Panasonic GH2 might be a better camera to use than Canon's DSLRs because unlike Canon the GH2 outputs a full HDMI image during recording. Unfortunately, Stuart also said that he'd heard reports from some people who had problems using the GH2, but since he only just got the unit himself, he hasn't yet been able to try it!

The Ki Pro Mini is shipping now, though they are heavily back-ordered; it could be up to 90 days to get delivery!

Paid in full 1 month ago. No word, contact or news on what's the hold up from AJA

At that meeting (one month ago) they were saying that they were heavily backordered and orders made then could take up to 90 days to fill.

If you need something before that, you might want to consider an alternative solution.

Delivery should start picking up now just weeks before NAB, check the AJA website on qualified cards, Lexar cards has been dropped from the list because the mini was indicating a record cycle when in fact there was no data recording to the card.