The stuff of madness

After seeing a sample clip from the NEX-VG10, I couldn't help thinking "that's disappointing." The low-light performance was only so-so, and the bokeh wasn't that impressive; making me wonder why bother with this large chip camera?

But then I was thinking that perhaps the lens was the real problem; add on something that was f/2.8 or less - rather than the f/3.8 it comes with - and that might make a big difference. 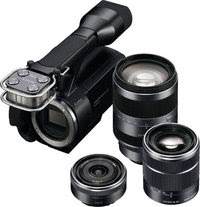 And just after that, I happened across an article at SonyAlphaRumors about using third party lenses with the NEX-5 (which uses the same E-mount found on the NEX-VG10.) One of the lenses they high-lighted was the Zeiss Planar ZM T* 50mm f/2 which is just $781. Of course, then you need an adapter to attach the ZM-mount to the E-Mount, but those are available at Amazon ...

Wait a minute! I've already been buying lenses for the Canon 7D; am I now going to go down that route for another camera?! Worse, it's not even worth getting an NEX adapter for the Canon lenses; they don't have aperture control. Clearly, I'm stuck, unless I were to do something really silly and go and buy Nikon glass and an adapter for the Canon so I can use the lenses on both cameras....okay that is crazy talk!


The NEX-VG10 might be an okay camera - we really need to wait for more definitive reviews and user reports - but it's clear to me that if I was even to touch the thing, I'd need to spend quite a bit of money on lenses too - probably third party lenses or Alpha lenses, which is going to increase the cost even more, and also means I lose the auto controls. Which means I'm kind of back to what I have with the 7D anyway; except the NEX-VG10 is not limited to 12 minute clips.

For the moment, I think I have to stop looking at the NEX-VG10. I don't think it's going to kill my DSLR.


Meanwhile, Cameratown has an "unboxing video" which is mostly description. They promise more later, and already have some in-the-field notes; "I couldn't find anyway to control audio levels." That's true; there's no manual audio control on the NEX-VG10.
Posted by Michael Murie at 9:00 AM

Don't lose all faith. I've finally done some field work and will post that video within the next day. I'm feeling better about it now.

Also, via Sonyalpharumors.com, it's been widely reported that there are numerous Zeiss lenses being developed specifically for E-mount, perhaps introduced next week at Photokina. The killer app for me is 50mm or so at f1.4 that maintains auto-focus, auto-aperture AND Active Steadyshot. For some stupid reason, Sony left out image stabilization from their 16mm f2.8 E-mount lens.

I'm still very interested in the camera, and am looking forward to hear what you think of it after you've had more time to play with it.