A bag of tricks 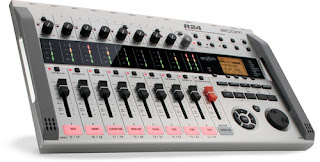 The Zoom R24 won't be out until July 7th, and no price has been announced, but this sure looks like an interesting gadget:


In addition to 24-track playback and 8-track simultaneous recording using SD memory cards, the R24 is a digital multi-track recorder, an audio interface, a control surface and a pad sampler.

So take it in the field and record 8-tracks simultaneously, and then bring it back and connect it up to your computer and use it as a control surface?! That's pretty amazing. I wonder what the price will be; under or over $1,000?


[UPDATE 6/18
I guess I should have looked into this a little more. Turns out it's an update on the R16, which has been available for a while and looks almost exactly the same and has almost identical functionality, but with only 16 tracks. The R16 sells for $399, so I figure the R24 will probably not be over $500?
As to performance, if the R16 is anything to go by then; many love it, a few hate it, and some can't get it to work with their computer. Pre-amps may be a bit noisy, but then what do you expect for $399?!
B&H: Zoom R16 ]
Posted by Michael Murie at 8:00 AM