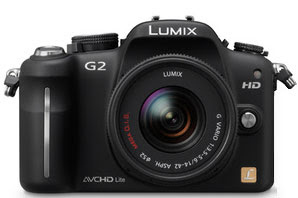 
The LUMIX G2 records 1280 x 720 HD videos in the AVCHD Lite format, which increases recording capacity and is highly compatible with audio-visual equipment. With a dedicated video record button, users can easily start recording a video. To complement its high-quality video capabilities, the LUMIX G2 features advanced audio options, as sound is recorded with Dolby Digital Creator and an optional accessory stereo microphone can be attached. A Wind Cut function further enhances the sound as it helps reduce noise caused from background wind.

The Panasonic LUMIX G2 will be available in red, blue and black models and pricing and availability will be announced 30 days prior to shipping date.


[UPDATE] While the camera records in 60 or 50 frames, it appears that it is using 30 or 25 fps data coming from the sensor, so unlike the Canon DSLRs that record in 60fps 720p, you're not going to be able to use it for improved slow motion effects.

They have also announced the DMC-G10, another Micro Four Thirds camera with 720P recording which is smaller and lighter than the G2 (and lacks the flip-out screen.) Personally, I think I'd go for the flip-out screen.
Posted by Michael Murie at 8:28 AM