I'm just back from the Camera Company's annual Pro Video Show. It's not a huge show, but it's only half an hour away for me, and it does provide an opportunity to see in one place all the gear that you can't find at the local Best Buy.

Sony had several cameras, including the EX1, EX3 and HXR-NX5U - I'll take one of each, please - and JVC and Panasonic were there too, along with Canon (but you'll have to wait for NAB to find out more about their next pro-video cam.) 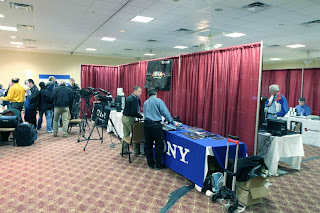 The Sony booth
I asked Dan Berube - who runs the Boston Final Cut Pro Group, and was manning the Canon table - when Canon would release the firmware update they have coming for the 5D in a 7D version and he looked surprised for a second - as though it wasn't something he had thought of - and then he said "That would be great, wouldn't it?"

Glidecam was there with their three different HD series stabilizers, as well as vests, arms and a jib. 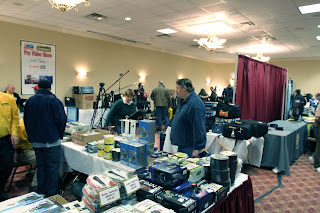 I went to several company seminars, and was only thrown out of one. A new record for me. I shall have to try harder next time.

These shows can be dangerous if you are in need of gear - a bit like going to a supermarket with an empty stomach. I hadn't gone there with the intention to buy anything, but they had such a good deal on a Sony UWP-V1, that I had to buy one. And they had a really nice Kata bag, which I definitely hadn't intended to get either, but that was such a good price that I had to buy that too.

Fortunately, I didn't buy the tripod head and legs as well, since I'd run out of money.


I'm going to try and write-up what I learned about 3D at the SMTPE and the Sony presentations on same.  Unfortunately, though I learned a lot, I'm not sure that I understand it any more. You may be better off not reading what I have to say... 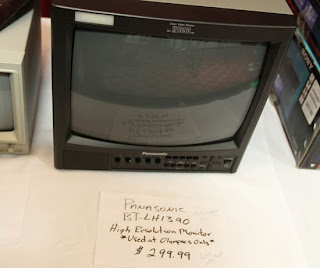 There were some interesting deals...
- used only at one Olympics?
Posted by Michael Murie at 6:48 PM