I went to a joint meeting of the Boston Final Cut Pro User Group and the Boston Avid Users Group last night. It was held at Rule Broadcast Systems, who I think paid for the free pizza, chocolate chip cookies and soda.

If you're in the greater Boston area and you're interested in video editing, you should definitely make an effort to catch a meeting. They have had some interesting meetings lately.

The featured speaker was colorist Alex Bickel of Outside Editorial, Soho NY. I’ll write more about that in a later post. Anyway, a couple of interesting things.

though I’m not 100% certain it was that model) and shooting sequences of still images and then turning them into video, and getting quite impressive results. He showed me a nice night-driving scene on his iPhone. Reminded me of a video I’d recently seen made using the burst mode on a Nikion SLR. Unfortunately I’ve been unable to find the link to that piece.

Meanwhile, the other speakers of the evening were from EditShare. They gave me a free pen.

EditShare is all about workflow management and shared storage solutions for Adobe, Apple, Avid, etc. etc. That’s about the only mention they get from me for a light-up pen. I tuned out because, being that my collaborators are me, myself and I, the thought of spending money on that kind of thing doesn’t often enter my head. BUT, they demoed “sharing” a project opened in both Avid and Final Cut Pro, and they made a change in one, and the change appeared in the other. I don’t need that capability, but it was still pretty cool. (That mention is for the second pen I took for my daughter.)

I was just getting interested when someone asked the price, and they said their systems start at $8,000. So I tuned out again (but I took a third pen for a friend.) Check them out if you’re looking for a workflow system, or a free pen. 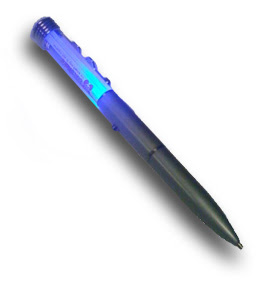 Posted by Michael Murie at 2:49 PM