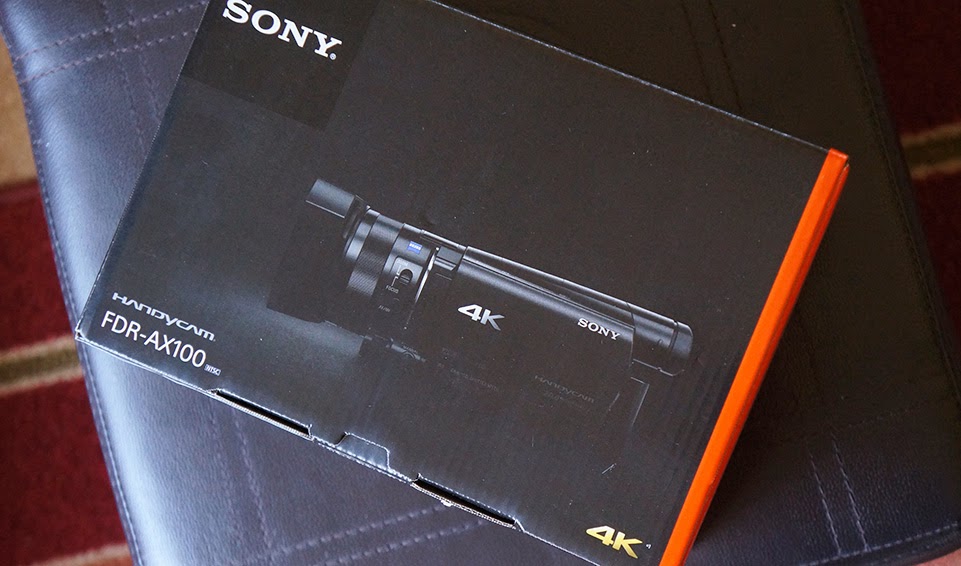 I just got the Sony FDR-AX100, which I think can be accurately described a being their "most inexpensive (currently) available" 4K camera. I thought it was time to at least dabble in 4K, but I didn't really have the budget to buy anything really good - no Sony F5 or Canon C500 in my budget!

But if you're not looking to spend more than $4k on 4K, there are some other choices. Why didn't I get one of those? 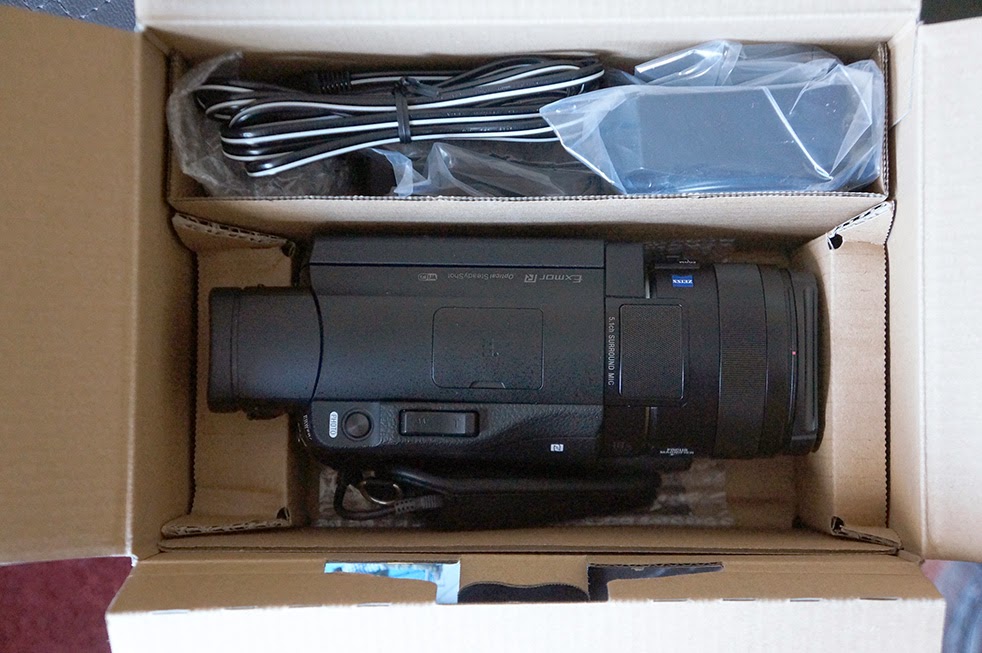 
At $4,498 (currently) the FDR-AX1 is over $4k, but close enough. It's intriguing to me, especially as I loved Sony's HD camera's in that format. Advantages; everything is in one box; for run and gun shooting it would be really good, and that's the kind of thing I do most of the time. It has more manual controls, more buttons and knobs and XLR audio inputs than the FDR-AX100.

The reason I didn't buy it; honestly I shoot a lot more stuff with small camcorders right now, and I'm planning to take the FDR-AX100 on a trip where size is definitely a consideration.

Also, for sit down interviews, I often use the NEX-EA50UH, which supports interchangeable lenses. Had there been a 4K version of that camera, I probably would have bought that.


For narrative work, I think the Blackmagic (or the Panasonic GH4) would be the way to go. At $3k it's $1k more expensive than the FDR-AX1, but you get the option of using different lenses and you - possibly - get greater dynamic range (I don't know if anyone has done a comparison yet.)

The camera shape is a bit awkward, and I'd be using it with the Canon lenses I have; which are large. In narrative, that's not so much of a problem, but for travel and run-and-gun, maybe not so good.

Honestly, I think I want something smaller and simpler.


Right now this is the 4K camera getting the most interest on the net. It's not available yet, but it should be available very soon. Personally, I'm not a big fan of using SLR-style cameras for video [I know, it's actually a mirror-less camera]. Also I don't have any lenses for it, though I could get an adapter to use some of the Canon mount lenses I have. Like the Blackmagic, it's more work to shoot with.

The GH4 is actually cheaper than the FDR-AX100 by about $300, BUT, I figure I'd have to buy at least one or two native lenses for the camera to give it a chance (why have something that small with a huge lens hanging off it?)

All that said, I wouldn't be surprised if I end up getting a GH4 some day... 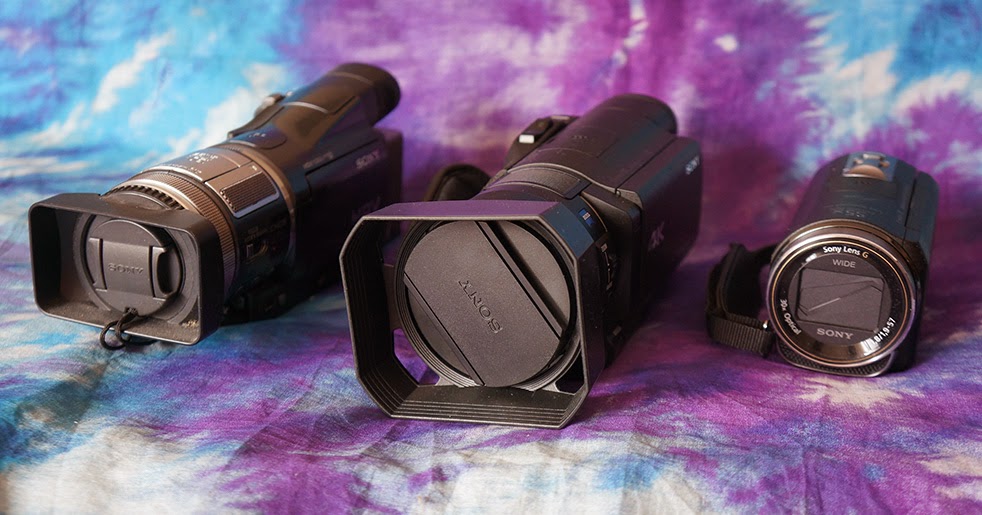 Here's the FDR-AX100 next to a typical current HD camcorder, the Sony HDR-CX430V and it's older HDVideo format brother, the HDR-HC1. It's still a pretty big sucker!

The HDR-HC1 was Sony's first $2K HDV camcorder, released back in 2005. The FDR-AX100 is almost exactly the same length as the HC1, but it's wider. They feel fairly similar in weight, though the HC1 feels slightly heavier and like its metal. It has a solid feel to it, while the AX100 feels more plasticy. 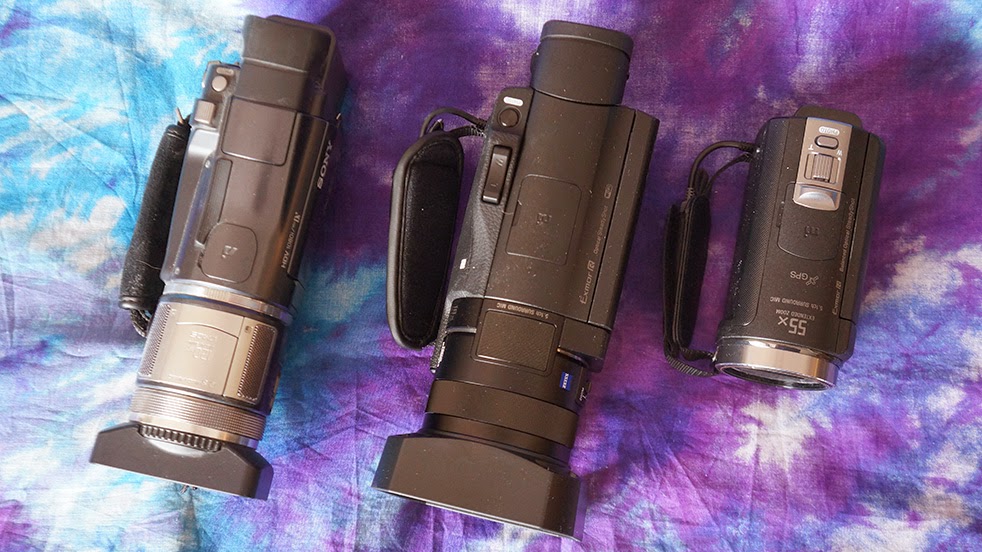 Lastly, when I turned on the camera, I immediately discovered that the fast SD card I had wasn't good enough for this camera. So I've had to order a Sony - 64GB SDXC Class 10 UHS-1 Memory Card. That should come Tuesday... 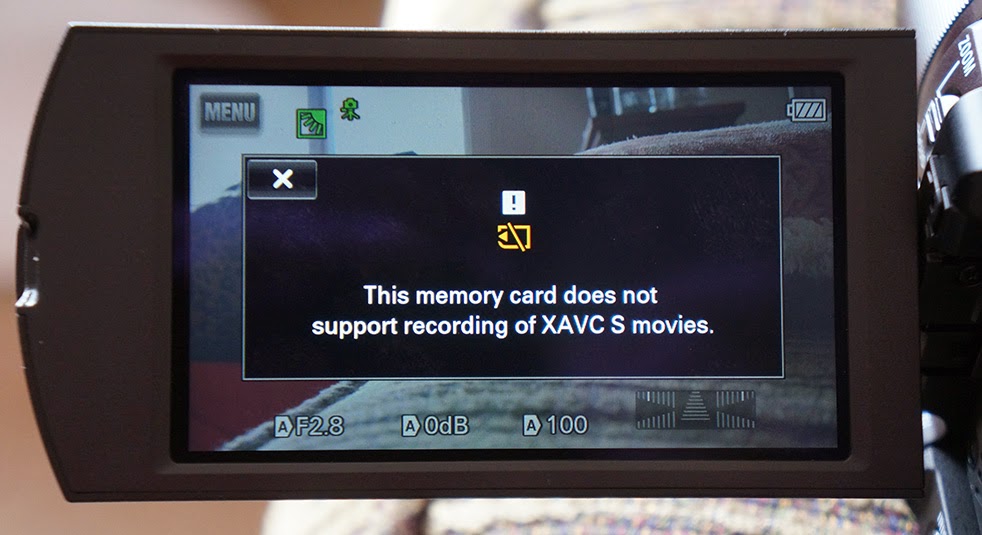 Looking forward to your comments on handling the camera on the go, and comparing resulting video as to quality and editing. Very nice if you compare it to the HDR-HC1, which I find to be nearly perfect in handling. I also have the NEX-VG30 which is way to bulky, but nice quality.

Please update us on your thoughts... pros and cons. Definitely like to see some 100% crop and 1080p crop of the 4k...both day and low light.