The memory card for the FDR-AX100 hasn't yet arrived, but that doesn't mean the 4K news stops coming! 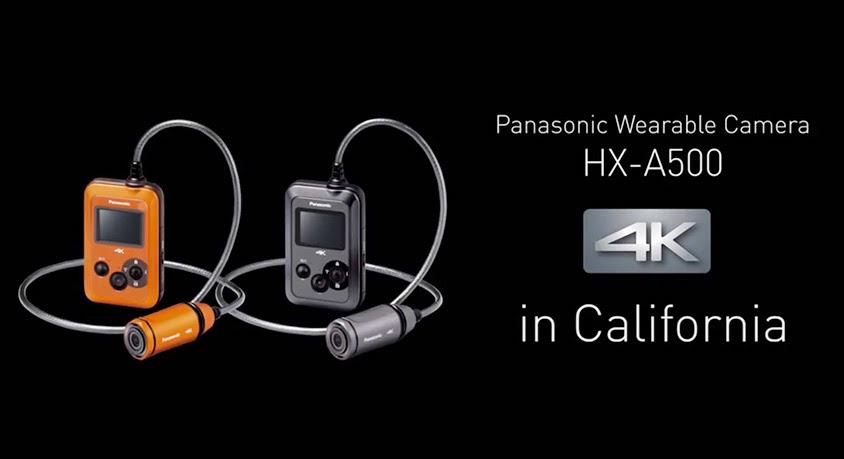 Panasonic went and announced the HX-A500, a 4K wearable camera. Available in May for about $600.

Looks interesting, though I do worry that 4K is going to be a bit like the early days of HD when some of the really inexpensive cameras jumped from 720P to 1080P; and yet there was no noticeable improvement in image quality. We'll have to wait for some tests and comparisons. I will say this; at 31g (1.1oz) for the camera unit and 119g (4.2oz) for the body unit, I should be able to fly it on the DJI Phantom!


Other shooting options include gnarly Levelling Correction to automatically straighten tilted videos; rad Image Stabilisation function to cut down on blur as you're bumping and bouncing across track or piste; and sick slow motion at 200 frames per second, 100 fps in 720p, or 50fps in full HD.


Our time with the HX-A500 was brief, so we can't pass any judgement on the quality or how it operates in action, although the preview content being shown by Panasonic looked good. We liked the predecessor and we can't wait to have a proper play with this new 4K version.

Meanwhile, let's not forget the upcoming Panasonic GH4. Over at EOSHD, they've been looking into getting 10bit 4K 4:2:2 video out of the camera without that large external box:

More information on 10bit 4K 4:2:2 via micro HDMI on the GH4 without external box | EOSHD


Panasonic have confirmed that the GH4 (quite amazingly) outputs 10bit 4K 4:2:2 from the onboard micro HDMI port without the YAGH external HD-SDI unit. However there are still benefits to using the HD-SDI outputs.


And Sony seemed to like one of my Tweets about the FDR-AX100...

Interesting
So I'm puzzling through the Italian/Greek manual included with the FDR-AX100, and it appears to say that the 4K XAVC video is 60 Mbps, and the 1920x1080 XAVC video is 50Mbps (which is fascinating in itself, because 50Mbps has been the widely rumored minimum requirement for the BBC.)

So that's interesting. And by the way, if you don't care about 4K, but would like some 1080 50Mbps action, you could buy the HDR-CX900, which is essentially the same camera as the FDR-AX100, but without the 4K support and $500 cheaper.