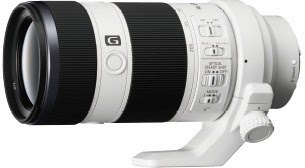 
This compact, lightweight telephoto zoom lens is ideal for full-frame E-mount bodies, delivering superb G Lens image quality throughout the zoom range. AA (advanced aspherical) elements, Super ED and ED glass elements, the Sony Nano AR Coating, and a 9-blade circular aperture add up to refined rendering with smooth bokeh where desired. Maximum aperture is a constant F4, and the physical length of the lens does not change when zooming or focusing. Dual linear motors ensure fast, precise focusing. Focus hold, range limiter and other controls are located on the barrel for easy access. Optical SteadyShot image stabilization is built in.


The Blackmagic Pocket Cinema Camera uses the open standard lossless compressed version of CinemaDNG RAW. CinemaDNG RAW lossless compression works in a similar way as a ZIP file where the RAW files are compressed during recording without the loss of any part of the image, so all images retain the same quality when they are decompressed. That means customers get back the mathematically perfect high quality RAW file image that they recorded.

These are the new 2:1 Compressed raw frames from the Pocket Cinema Camera. This is the first look at how the compression may or may not affect the image. The only thing I have noticed is that compression breaks OSX’s ability to display the DNG frames in Finder. So far the image quality looks as it should… Lossless!


The recent rumours surfacing of Panasonic releasing an AG-GH4 around the $3000 mark have been given a boost. Panasonic have now officially announced the existence of a 16MP Micro Four Thirds sensor which is capable of 4K video at up to 30fps, matching the rumoured specs of the GH4.


1) Color Correction & EffectsThere was a time not so long ago when video color correction was a luxury that was only accessible to top-of-the-totem pole television and video producers. Everyone else did their best to capture the best color they could in the camera. This meant setting the camera’s exposure properly for the scene, and occasionally shooting through physical lens filters to add color to a sunset or to simulate the darkness of night.


"Alpha House" isn't entirely success, but it's certainly watchable, and comedies tend to take more time to find their center than dramas. But Amazon's choice to kick off its originals with something so innocuous does underline the difference in its approach as compared to Netflix.

Epic Fail: How Blockbuster Could Have Owned Netflix | Variety


“But management and vision are two separate things,” said a former high-ranking Blockbuster exec at the time, recalling, “We had the option to buy Netflix for $50 million and we didn’t do it. They were losing money. They came around a few times.”


In light of the upcoming November 22 theatrical release of Roman Polanski's restored and re-cut 1972 documentary "Weekend of a Champion," last week's New York City screening paid tribute to the film's decades-long journey by following with a rare press conference that included Polanski himself via Skype as well as Jackie Stewart, the Formula 1 film's star subject, and producer Brett Ratner, both of whom were present in person.

EXCLUSIVE: Behind the Scenes at Studio Ghibli and Miyazaki's Oscar-Contender 'The Wind Rises' (TRAILER) | IndieWire


Possibly the last film from Hayao Miyazaki, the Walt Disney of Japan, who won the animated Oscar for "Spirited Away," "The Wind Rises" is not aimed at young kids. It's a gorgeously drawn historical true story of the brilliant designer behind the Zero fighter plane that wrecked havoc in World War II.


The Challenge gets underway on Friday, December 6 at 8pm.  A representative of each team must come to our offices to get your GENRE, TAGLINE and PROP. You then have two days to write, produce and edit a 4-7minute film in time to bring it to us at our offices on Sunday, December 8 by 8pm.