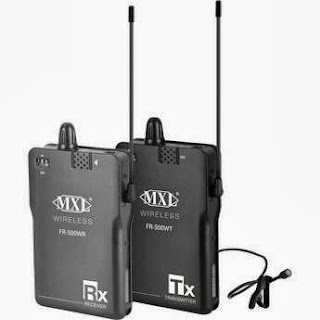 MXL FR-500WK Wireless Mic for Videographers
I wasn't even aware that MXL, who makes a variety of inexpensive mics, had a wireless mic system available specifically designed for videographers. But here's the MXL FR-500WK and at $399.95, it's $99 cheaper than Sony UWP-V1, which is $499. I haven't used the MXL, but I love the Sony UWP-V1; I've had it for a few years, an it just keeps working with little problems (except when the battery leaked a couple of weeks ago!)

Would I buy the MXL instead of the Sony? I might, though having one unit I'd probably buy the same again just because I'm familiar with it.

I did notice that the FR-500WK receiver has a built-in speaker...I personally don't think monitoring at the receiver is a good idea - better to monitor what the camera is actually recording - but that might be useful for DSLR users who can't monitor from their camera and are trying to diagnose issues during setup.


I also tested out the system at a press event, to see if any loud ambient sound would be an issue when recording and I found that it did in fact pick up quite a bit of dialogue and music, though it wasn’t so overwhelming that it took away from what I was trying to record. Still, the further you move from being in the center of background noise, the better.


Hacking Arts, a two-day event to “explore the intersection of arts and entertainment, technology and entrepreneurship” was held this last weekend at MIT’s Media Lab. The first day consisted of panels and product demos, while the rest of the event was devoted to participants working together to come up with new ideas in various topic areas, from mobile to art education.


Vince is a student of cinema and knows movies like the back of his hand. It was always in his mind that this was a Western in the style of Sergio Leone and the Italian Neo-realists. And he loved expressive lighting like The Godfather, so this was the hybrid we’re trying to put together.


Once the Hawaiki Color filter is applied to the desired clips in your timeline – and you have set the filter to be displayed in a window or full screen with overlaid controls – it becomes very easy to move from clip-to-clip in a very fast grading session.

50MM SHOWDOWN! CANON L SERIES F1.2 VS STANDARD F1.8 | VideoMaker
If you skip the intro, there's some interesting comparisons between the cheapest ($110) and the most expensive 50mm lens ($1,439) that Canon makes in this video tutorial. There's obvious differences, even though in many shooting situations, you'd be hard pressed to see the difference. Still that f1.2 is a nice piece of metal and glass.
And did I say it's the most expensive Canon 50mm? Of course not! You could always get the CN-E 50mm T1.3 L F Cine Lens for $4,700. Now there's a lens!


Ever wonder what the difference is between those high-end L series lenses and the inexpensive ones? We put the Canon L series 50mm up against the economical Canon 50mm f1.8 testing focus, bokeh, image quality, and vignetting.


The two filmmakers explain their stylistic choices and how they translate into the film language. For instance, they divulge that in the storyboard, they drew Lester’s reflection in his computer with horizontal lines, but in the film, they switched it to vertical lines to give the sense that he was behind prison bars.


My first step was to create proxy files from the RAW Cinema DNG’s. To do this I used DaVinci Resolve, as naturally it is built with the BMCC in mind. There are many other options for conforming BMCC footage including going to Photoshop or After Effects to create your proxies, but with the amount of time I had to do this, I used Resolve as I knew it was a tested workflow that was pretty bulletproof.